Simran Sachdeva Quits Choti Sarrdaarni Over Monetary Issues, Alleges A Producer of Misbehaving With Her (Deets Inside) 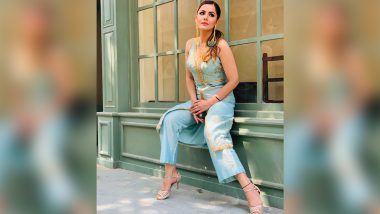 In a welcome respite to many from the entertainment industry, the government has given the nod for shoots to resume. And while a lot of actors are geared up for returning to the work grind that they have been missing since March, actress Simran Sachdeva's break will continue for a while longer. The actress, who was playing the role of Sarabjeet's (Avinesh Rekhi) sister Harleen, will no longer be a part fo show. It can be recalled that Simran had replaced actress Mansi Sharma and now she has been replaced by Drishtii Garewal. Choti Sarrdaarni Actor Amal Sherawat On His Building Getting Sealed After A Resident Found COVID-19 Positive, Says 'The Patient Is Not In Danger'.

And in a conversation with a media portal, Simran went on to reveal the real reason for her to not return to the show. They consist of monetary issues and a producer misbehaving with the actress. Choti Sarrdaarni Actress Mansi Sharma and Husband Yuvraaj Hans Blessed With Baby Boy (View Pic).

"There are more than one reasons for the same. Lately, the producers were pressuring me a lot to take around a 40% pay cut which is not feasible for me. Also, in the past I’ve faced many issues with the production house regarding the payments as we weren’t paid on time," Revealed Simran to Tellychakkar. Choti Sarrdaarni Actress Anita Raj In Trouble With Cops For Organising A Party At Her Home, Actress Denies Allegations (Details Inside).

She further continued, "One of the producers misbehaved with me and were extremely disrespectful and rude. Now, because of the lock down and the gap, I had the choice to continue with them or not and hence I decided to give it a pass." Well, Simran can be assured that viewers of the show, who had grown to love her as Harleen will miss her!

(The above story first appeared on LatestLY on Jun 03, 2020 12:19 PM IST. For more news and updates on politics, world, sports, entertainment and lifestyle, log on to our website latestly.com).