Class of '83 on Netflix or Aashram on MX Player - Which Bobby Deol's Digial Outing are You Most Excited About?

While we are excited for both, what's your take on his releases? Are you excited about Class of '83 or does Aashram have all your attention? 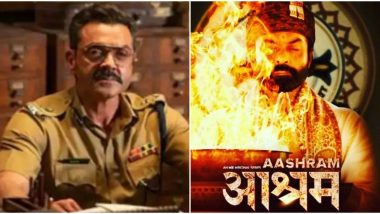 Bobby Deol in Class of '83 and Aashram (Photo Credits: Instagram)

Bobby Deol's gearing up for as many as two digital releases in the same month. While the actor was earlier announced as the lead of Shah Rukh Khan's next production venture, Class of '83, he also bagged Prakash Jha's new web series, Aashram. Yes, he hasn't marked his debut in the web space yet and we are looking forward to August 21, the date when his web series debut hits Netflix. Bobby's Class of 83 is all set to release a week before Aashram and it also means an exciting week lying ahead for all the 'Boobians' - his fanbase. Class Of 83 On Netflix: Meet Bobby Deol's Cop Dean Vijay Singh in Shah Rukh Khan's Production (View Pics).

Bobby's Class of '83 is about an IPS officer whose students grapple with the complexities of honour, morals and devotion towards their nation. Produced by Shah Rukh Khan's Red Chillies Entertainment, the show was among Netflix's new lineup of 17 originals. The announcement was followed by the makers of Aashram releasing a teaser video of his next with Prakash Jha.

It's a rare feat for an actor to have two digital releases within a week and we are glad for Deol Jr is gearing up to dominate the web space. After actors like Abhishek Bachchan who recently forayed into digital space with Breathe Into the Shadows and actors like Ajay Devgn, Akshay Kumar and Alia Bhatt are already looking forward to their OTT releases, Bobby's another prominent name from the industry who's eager and excited about his new OTT ventures. Here's wishing him all the luck for the same. Bobby Deol's Digital Outing with Aashram is the New Topic For Meme Makers; Netizens Welcome His Announcement with Amusing Reactions.

Class of '83 or Aashram - Which Bobby Deol Release are You Most Excited About?

While we are excited for both, what's your take on his releases? Are you excited about Class of '83 or does Aashram have all your attention? Tell us your views by voting for the desired name above.

(The above story first appeared on LatestLY on Aug 06, 2020 11:19 AM IST. For more news and updates on politics, world, sports, entertainment and lifestyle, log on to our website latestly.com).