Bigg Boss 13 winner Sidharth Shukla and Bigg Boss 10 participant Monalisa aka Antara Biswas were also a part of music videos before their careers took off and that too.... together. 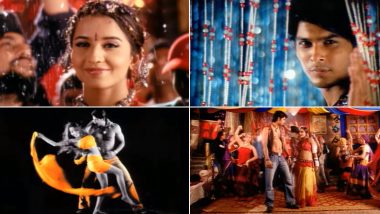 There was a time in the television industry when music videos were quite prevalent. Afterall, Shefali Jariwala made a name for herself as the "Kaanta Laga" girl, and we all still adore her. Well, there were many other television actors who were part of music videos before they became well-known faces cast in daily soaps, for instance, Drashti Dhami ("Saiyyan Dil Mein Aana Re"), Sanaya Irani ("Mere Naseeb Mein Tu") Ashish Chowdhury ("Vaada Karo") Sudeep Sahir ("Channa Ve") and Mahhi Vij ("Tu Tu Hai Vahi") to name a few. Sidharth Shukla and Shehnaaz Gill's Bhula Dunga Music Video With Darshan Raval Crosses Over 30 Million Views.

But little did you know that Bigg Boss 13 winner Sidharth Shukla and Bigg Boss 10 participant Monalisa aka Antara Biswas were also a part of music videos before their careers took off and that too.... together. Yes, you read that right. The actors were a part of Illa Arun's famous "Resham Ka Rumal" track. Bhula Dunga Music Video Out: Sidharth Shukla and Shehnaaz Gill's Chemistry Is Electrifying, Song Showcases SidNaaz Moments and We Love It (Watch Video).

Both Sidharth and Monalisa are established actors today. While Monalisa aka Antara Biswas is one of the most sought-after actresses in Bhojpuri film industry and made her TV debut with Nazar, Sidharth attained stardom with his role in Balika Vadhu and was recently crowned the winner of Bigg Boss 13. Well, they both have sure come a long way... haven't they?

(The above story first appeared on LatestLY on May 13, 2020 11:44 PM IST. For more news and updates on politics, world, sports, entertainment and lifestyle, log on to our website latestly.com).