The Bold and the Beautiful: CBS Show to Resume Production After Coronavirus Hiatus With Safety Measures On Set

As for the safety measures, the CBS show will have an on-set coordinator who will oversee safety for the cast and crew, as well as several precautions 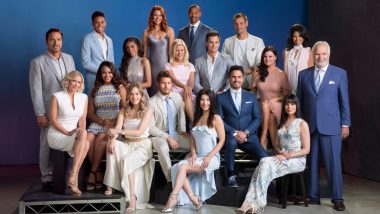 Makers of the long-running American television series The Bold and the Beautiful has decided to resume filming its current season from June 17, in accordance with safety measures to prevent coronavirus spread. As for the safety measures, the CBS show will have an on-set coordinator who will oversee safety for the cast and crew, as well as several precautions. Remember Kelleth Cuthbert, 'Fiji Water Girl' at Golden Globes 2019? She Just Landed a Role in Soap Opera 'The Bold and The Beautiful'.

Cast and crew will be required to wear masks when not on camera. Scripts are being rewritten in order to allow for staggering the number of people on set, and everyone involved will be regularly tested. The first round of tests was taken on June 15 as the first step towards pre-production. The shooting will start from tomorrow onwards at Television city.

The safety guidelines fall in line with LA County and the City of Los Angeles requirements and have been approved by the guilds and Television City owner Hackman Capital Partners, reported Variety. The Bold and the Beautiful has been on the air since 1987. CBS has renewed its daytime drama for two more seasons, where the pickup will take the show through its 35th season in 2021-22. (ANI)