[EXCLUSIVE] Indian Matchmaking’s Aparna Shewakramani Opens Up on Sima Taparia’s Skills, Her Shenanigans and Much More!

We at LatestLY got a chance to interact with Indian Matchmaking’s Aparna Shewakramani wherein she was all unfiltered and at her honest best. Check it out. 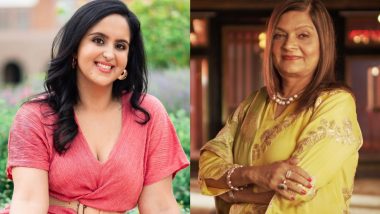 It’s been quite a while since Indian Matchmaking made it to Netflix and showed the bittersweet truth about how the ‘marriage industry’ actually functions. The show churned mixed reviews which saw seven aspiring faces seeking help from a Mumbai based matchmaker, Sima Taparia to find a suitable spouse for themselves. However, it was Aparna Shewakramani, one of the  participants on the show who emerged as quite an opinionated girl and ‘called a spade a spade.’ She was unapologetic about her harsh but real views and that's what made her a star of the series. Recently, we at LatestLY got a chance to interact with Aparna and must admit she was damn honest as well as candid. Netflix's Indian Matchmaking: Who is Sima Taparia? All You Need to Know About the Mumbai-Based Matchmaker Who Has Become The New Viral Sensation.

Well, on the reality show, Aparna did not find a match and so we quizzed her if she is still seeking a guy via matchmaking. To which she replied, "I am open to meeting someone through any avenue but I am currently not using a traditional matchmaker." That's not it, as we also asked her take on Sima's matchmaking skills, and her answer was crisp and clear. "I believe Sima is doing her best with the understanding she has of the world and matchmaking in general. However, times are changing and the modern woman needs her own agency and voice in the process," she said.

Ahead in the conversation, we also questioned Aparna about how her appearance on the show led to strong criticism from the more traditional audience and a cheer from the torchbearers of feminism. To which, she replied, "Each person on the show, be it me or any of my castmates, is much more nuanced and complex than the simplified archetypes portrayed on the show of "the strong, stubborn lawyer" or the "divorced single mother" etc. We need to consider the way we consume reality television and realize that no one is as good OR as bad as they appear when they are heavily edited and crafted into 2-dimensional boxes." Netflix's Indian Matchmaking Funny Memes and Jokes Are The Only Best Match You'll Get Out Of This Cringe Reality Show.

Aparna also talked about her life after Indian Matchmaking and gave us quite an insight. "It's been such an exciting whirlwind! I've enjoyed engaging with the viewers around the world the most - their stories about matchmaking and their support for seeing a strong south Asian woman on their television screens have been so moving. I am also busy writing a book about my life, including my experience on the show (so fans will really enjoy that!)," She said.

"I continue to work hard on my luxury travel company, My Golden Balloon, as we await for travel to become safer again. I am so passionate about my company, which offers curated international tours to professionals around the world. It continues to be my favourite "work" - since, for me, it never feels like work!" she added. Well, we are so proud of Aparna for being this strong-headed woman. Stay tuned!

(The above story first appeared on LatestLY on Oct 25, 2020 08:10 PM IST. For more news and updates on politics, world, sports, entertainment and lifestyle, log on to our website latestly.com).