The series has been helmed by Sahir Raza and written by Sidhanta Mathur, the series stars Preet Kammani, Vishnu Kaushal, Mihir Ahuja, Anshuman Malhotra, Himika Bose and Inayat Sood. Mihir Ahuja, who plays Akhil Gandhi in the series, and will be soon seen in the Zoya Akhtar directorial The Archies. 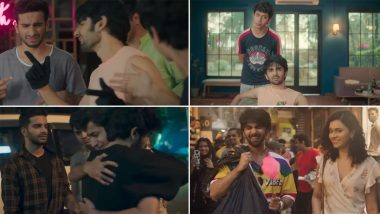 The trailer of the upcoming slice-of-life series Feels Like Home was released on Wednesday. The series follows the lives of four boys, who move into their first house away from home, it brings together a whirlwind of emotions, friendship and a hefty dose of 'bromantic hangover'. From Lionsgate Play to HBO Max, List of New OTT Players That Might Disrupt Netflix, Amazon Prime Video, Disney+ Hotstar’s Business in India.

The trailer opens with the introduction of 'Banchhod Niwas,' a house rented by four bachelors to achieve their dream. From parties to finding a housekeeper to cleaning their house and fun scenes that assure fall-off-your-seat comedy, the trailer offers a rollercoaster journey with slice-of-life nostalgia moments.

Calling it a fresh take on comedy-drama, Preet Kammani, who portrays the character of Lakshay Kochhar, said, "Feels Like Home is a mad ride, a fresh take on comedy-drama about four boys, one house and their journey to adulthood. A youthful show that revolves around an ensemble of characters and perfectly blends the elements of romance, friendship, and daily struggles of youngsters into a beautifully knitted story."

"We have a set of incredibly talented, passionate and hardworking people whose aim is to bring something fresh to the audiences. A heartwarming and yet ribtickling tale of friendship and togetherness. I am very excited for everyone to watch, laugh and cry and then cry as they laugh with us in the show", he further mentioned. Lionsgate Play Launched in India to Take On Netflix, Amazon Prime & Disney Plus Hotstar.

The series has been helmed by Sahir Raza and written by Sidhanta Mathur, the series stars Preet Kammani, Vishnu Kaushal, Mihir Ahuja, Anshuman Malhotra, Himika Bose and Inayat Sood. Mihir Ahuja, who plays Akhil Gandhi in the series, and will be soon seen in the Zoya Akhtar directorial The Archies, said, "It feels great to be associated with Lionsgate Play and to be a part of this phenomenal journey."

Shedding light on his character, he added, "Akhil Gandhi as a character, is genuine, innocent and focused...but he had to make some sacrifices to pursue his dream and passion for cricket. Watch Feels Like Home to understand Gandhi and the world around him and his relationship with Lakshay, Avi and Sameer. I think viewers will be able to relate to him." Feels Like Home will be available to stream on Lionsgate Play from June 10.

(The above story first appeared on LatestLY on May 25, 2022 08:16 PM IST. For more news and updates on politics, world, sports, entertainment and lifestyle, log on to our website latestly.com).