Actress Akansha Ranjan Kapoor made her acting debut in the Netflix film "Guilty", which highlighted the #MeToo movement. She feels it is unfortunate that we need films like "Guilty" to restart the conversation about sexual harassment. 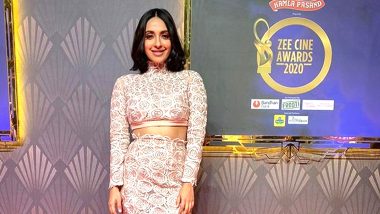 Actress Akansha Ranjan Kapoor made her acting debut in the Netflix film "Guilty", which highlighted the #MeToo movement. She feels it is unfortunate that we need films like "Guilty" to restart the conversation about sexual harassment. "It's unfortunate that we need films like this for people to restart the conversation, but that was our aim. People have a very short attention span. But this (sexual harassment) has been happening forever and I feel that #MeToo is here to stay," said Akansha. Kiara Advani’s Netflix Film Guilty Is Very ‘Relatable to Anyone’ Says, Director Ruchi Narain.

In "Guilty", Kiara Advani essays the role of a girl whose boyfriend, a darling of the college, is accused of rape by a smalltown girl who is not quite the popular one in the campus. The film explores different versions of what might have happened before the truth is laid bare. Akansha plays the smalltown girl Tanu Kumar from Dhanbad, who is at the centre of all the drama. Asked if she expected a positive response for her first film, Akansha said: "I have dreamt of it my whole life. Before shooting for it, I would think, 'I am going to do my first film and I am going to get this kind of response', so it's a dream come true moment for me." Guilty Movie Review: Kiara Advani’s Netflix Original Misses Out On Making a Strong Statement About the #MeToo Movement.

Talking about her character, she claimed: "After watching the film, every girl has messaged me or reached out to me saying 'sorry' for judging Tanu, or that they all want to be like Tanu. Nobody has told me it is a very bold character. They have either said sorry or they have said they want to be as confident as Tanu, because she has given them more self-esteem. Tanu has given me confidence, too. I could not dress the way she does. She is her own person and she doesn't need validation from anybody. People consider her a golddigger but she knows that she is the gold." Directed by Ruchi Narain, "Guilty" also features actors Taher Shabbir and Gurfateh Singh Pirzada in key roles.

(The above story first appeared on LatestLY on Mar 17, 2020 07:54 PM IST. For more news and updates on politics, world, sports, entertainment and lifestyle, log on to our website latestly.com).