Hina Khan Music Videos: ‘Humko Tum Mil Gaye’, ‘Raanjhana’ and ‘Bhasoodi’ Are Must Watch for Hinaholics out There! 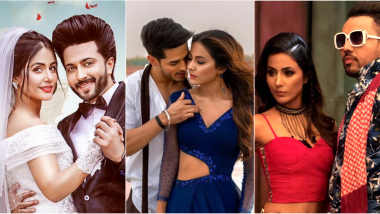 Small screen audiences first saw Hina and Dheeraj in Naagin 5 as archenemies. She played the role of Sarvashresth Adi Naagin Nageshwari, a shapeshifting serpent. Meanwhile, Dheeraj essayed the character of Cheel Aakesh, who is Nageshwari's obsessive lover and enemy. He is eventually killed by her. However, now fans will get to see these two good-looking actors as each other's support system in "Humko Tum Mil Gaye". Humko Tum Mil Gaye Music Video: Hina Khan and Dheeraj Dhoopar's Emotional Track Is All About Overcoming Difficulties With Love (Watch Video).

This Zee Music Originals single reunited Hina with her BFF from Bigg Boss (Hindi season 11), Priyank Sharma. The 2019-released track, "Raanjhana" was nothing extraordinary in terms of story or production but fans of the two actors rejoiced their pairing. Hina and Priyank's punar janam and janmo janmo ka pyar will intrigue you if you secretly dig romantic clichés and movie tropes. And above it all, you have the soothing voice of Arijit Singh! Raanjhana Song: This Hina Khan - Priyank Sharma Track Is All About Honour Killing and Re-Incarnation (Watch Video).

"Bhasoodi" remains Hina's first single and she did a fab job of it. Released in 2018, "Bhasoodi" featuring musical artist, Sonu Thukral, garnered around 8 million views on the day of its release. Hina not only put her glamorous avatar on display but also flaunted her dancing skills in the Geet MP3 song.

Hina Khan is such a delight to watch in all these videos. She is the cynosure of all eyes in these music singles, and that makes her a true star. She has the desired screen presence that keeps the audiences glued to their TV screens. Fans will most definitely look forward to seeing more of Hina Khan's music videos in the near future.

(The above story first appeared on LatestLY on Sep 15, 2020 03:25 PM IST. For more news and updates on politics, world, sports, entertainment and lifestyle, log on to our website latestly.com).