Indian Matchmaking Surprise Episode: From Nadia, Vinay to Akshay and Aparna, The Participants Come Together for a Spicy and Saucy Ending to the Series (Watch Teaser)

One show on Netflix which is making the right amount of noise is ofcourse Indian Matchmaking. So do you have questions after watching it? Well, the answer lies in this teaser video. Check it out. 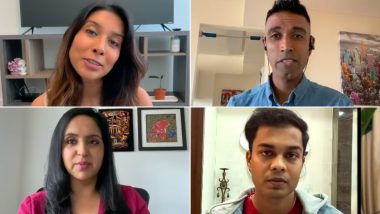 One show on Netflix which is making the right amount of noise is ofcourse Indian Matchmaking. The interesting part about this reality show is that even though it is cringeworthy, you will be unable to stop watching it as it's super addictive. The show's star is Sima Taparia from Mumbai who happens to be a matchmaker en route to find a suitable candidate for her clients who are willing to get married. Sima Mami (that's what she calls herself) is very true to her business and brings a match as described by the client. You want tall, dark, handsome, educated etc. just say it and Mrs Taparia has biodatas ready. However, the series first season ended quite abruptly making fans curious and think a lot. Netflix's Indian Matchmaking: Who is Sima Taparia? All You Need to Know About the Mumbai-Based Matchmaker Who Has Become The New Viral Sensation.

Well, now Netflix is all set to give you answers as it has dropped a mini teaser of the final episode and we bet fans are excited for sure. The video shows all the participants from the series like Nadia, Vyasar, Akshay, Aparna and more. What's now between Nadia and Vinay? Is Aparna stubborn? Akshay on managing his kids' and more, all gossip is to spill soon. This one will be hosted by YouTuber Dolly Singh. Netflix's Indian Matchmaking Funny Memes and Jokes Are The Only Best Match You'll Get Out Of This Cringe Reality Show.

Check Out The Teaser Of Indian Matchmaking Below:

Get your cups ready because we’re spilling ALL the tea ☕👀 Stay tuned for the whole episode at 2 pm tomorrow -- On our YouTube Channel.

Many spicy and saucy questions will be answered in this surprise episode releasing on on Netflix India's YouTube Channel. However, the only drawback we feel here is that Sima will be missing from this catch-up session. For the unversed, Indian Matchmaking is a Netflix original wherein the season one has eight episodes in total. Stay tuned!

(The above story first appeared on LatestLY on Jul 29, 2020 02:48 PM IST. For more news and updates on politics, world, sports, entertainment and lifestyle, log on to our website latestly.com).