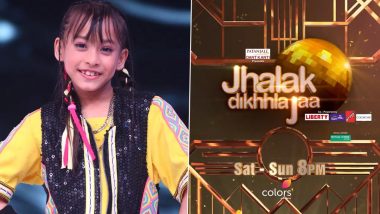 Jhalak Dikhhla Jaa season 10 has come to an end and the winner of the show is Gunjan Sinha. In an exclusive conversation with Gunjan, she reveals her journey on the show.

The competition has been very tough, so how does it feel holding the trophy?

I am extremely elated. I wanted to win but I always had this thought that I would become the second runner up. Frankly speaking, as the competition drew closer, I almost started manifesting and I dreamt about me winning too. It is almost like a dream come true for me. Jhalak Dikhhla Jaa 10 Winner Poll Results: Fans Predict Gashmeer Mahajani As the Victor; Rubina Dilaik Grabs the Second Spot Followed by Sriti Jha!

Who do you think gave a tough fight?

Everyone gave their best and so was I. The competition was tough and all the participants put their best foot forward according to me. Jhalak Dikhhla Jaa 10 Finale: Gashmeer Mahajani, Rubina Dilaik, Sriti Jha, Nishant Bhat, Faisal Shaikh, Gunjan Sinha – Who Will Lift the Trophy? Vote Now!

According to you, which performance of yours has been the best?

My favourite performance was the one where I performed a lavani dance on ‘Apsara Aali’. I also liked ‘Humma Humma’ and ‘Manike’. They were hit performances by me and were appreciated by the audience and judges alike.

What memories do you take back from Jhalak Dikhhla Jaa season 10?

I will never forget getting a study option while I was under training for my performance on the song ‘Apsara Aali’. As for the show, my favourite memories are getting the golden chain and spending some great time bonding with the contestants of this season.

(The above story first appeared on LatestLY on Nov 27, 2022 10:50 PM IST. For more news and updates on politics, world, sports, entertainment and lifestyle, log on to our website latestly.com).