Bigg Boss 13 runner-up, Asim Riaz thanked fans for the love his song Kalla Sonha Nai has received by sharing a video wherein he can be seen being a confused soul between Himanshi and Neha. Check it out! 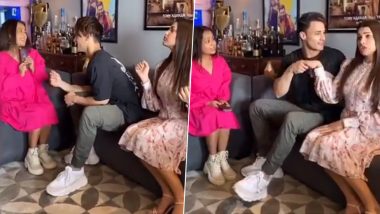 Bigg Boss 13 runner-up, Asim Riaz and Himanshi Khurana's love story on the controversial reality show became the talk of the town. Their bond for each other was so strong that after the reality series, the two signed a music video which was out yesterday. Fans were eagerly waiting for the song to drop soon and once it did, they were on cloud nine. Titled as Kalla Sohna Nai, the melody is sung by Neha Kakkar. Now, thanking his fans and overwhelmed by the love his track has received, Riaz took to his Instagram and shared a fun Tik-Tok video featuring Neha and Himanshi. Kalla Sohna Nai Song: Asim Riaz and Himanshi Khurana's Fun and Crackling Chemistry Wins Our Hearts (Watch Video).

In the clip, we can hear Kalla Sohna Nai song playing in the background wherein Neha, Asim and Himanshi can be seen seated on a sofa. But that's not it, as the highlighting of the video is that here the Bigg Boss runner-up is seen wooing both Khurana and Kakkar. The chemistry between AsiManshi is cute, but Neha and Asim's camaraderie is also unmissable. All in all, we love this aww-worthy video. Asim Riaz and Himanshi Khurana Enjoy a Coffee Date in Chandigarh and Fans Can't Keep Calm Looking At Their Adorable Pictures!

Check Out The Video Shared By Asim Below:

Thank you is the only word I can say to you alll !!! #KallaSohnaNai trending no 1 world wide ! @nehakakkar @iamhimanshikhurana #asimriaz

So, what's your take on the above clip? It's yay or nay? Meanwhile, speaking of the song featuring #AsiManshi, it's quite a soothing Punjabi treat wherein the cherry on the cake is its music. Before this track, Asim had featured in a Holi song named Mere Angne Mein opposite Jacqueline Fernandez and further has a project lined up with DJ Snake. Stay tuned!

(The above story first appeared on LatestLY on Mar 20, 2020 05:41 PM IST. For more news and updates on politics, world, sports, entertainment and lifestyle, log on to our website latestly.com).