This season will see host Rohit Shetty and contestants heading to Cape Town for the new adventure and some exceptional stunts. Here are a few of the contestants that will be a part of KKK 12. 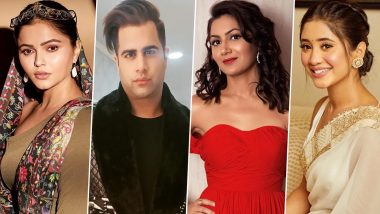 The all-time favourite stunt-based reality show Fear Factor: Khatron Ke Khiladi 12 is all set to begin soon. The show hosted by Rohit Shetty is based on the format of American show Fear Factor. The makers are keen to make the upcoming season grand and take the reality TV show to another level. This season will see host Rohit Shetty and contestants heading to Cape Town for the new adventure and some exceptional stunts. Here are a few of the contestants that will be a part of the show. Khatron Ke Khiladi Season 12: Shivangi Joshi to Be a Part of Rohit Shetty’s Stunt Based Show!

TV actress Rubina Dilaik is all set to be part of the stunt-based reality show. Bigg Boss 14 winner Rubina is known for essaying the role of Radhika in Chotti Bahu and Soumya Singh in Shakti - Astitva Ke Ehsaas Ki. She also appeared in music videos. The actress had made her Bollywood debut with the Hindi movie Ardh.

Kumkum Bhagya fame Sriti Jha will also be seen on the show. The actress who has received a lot of appreciation for her role Pragya Arora in Kumkum Bhagya is gearing up for her new journey and try some daredevil stunts on Rohit Shetty hosted reality show Khatron Ke Khiladi. Sriti made her debut in 2007 playing Malini Sharma in teen drama Dhoom Machaao Dhoom. She went on to be a part of Jiya Jale and also participated in the dance reality show Nachle Ve.

Actress Shivangi Joshi, who entertained the audience by playing a dual role in Naira Singhania Goenka and Sirat Shekhawat Goenka in Yeh Rishta Kya Kehlata Hai. She made her TV debut in 2013 with Khelti Hai Zindagi Aankh Micholi. Later she played Aayat Haider in Beintehaa.

Doing the reality show is going to be a new experience for her and even the viewers will get to see her in new avatar, doing action and some challenging stunts. It will be interesting for the audience to see her doing stunts and it will change her screen image.

Ace choreographer Tushar Kalia is now confirmed to be a part of the show. The choreographer who had participated in dance reality show Jhalak Dikhhla Jaa and was also the stage director of the reality show India's Got Talent. He made his career as a choreographer in Bollywood with the movie Ae Dil Hai Mushkil. Now he will be exploring new adventures on the stunt-based reality show.

Popular model and actor Erika Packard will be seen making her entry in the show. She is a daughter of well-known actor Gavin Packard who worked predominately in Bollywood and Malayalam movies. Now on the show she will be seen trying her capabilities and conquering her fear. It will test her mental and physical strength. Khatron Ke Khiladi 12: Rubina Dilaik Is a Confirmed Contestant for Rohit Shetty’s Stunt Based Reality Show!

Ace of Space fame Chetna Pande will be sees testing her determination and willpower. She appeared in MTV Fanaah and also did several music videos. She also became popular for her role of Jenny in Dilwale.

Former model and entrepreneur Rajiv Adatia is popularly known for his stint in Bigg Boss 15 is also set to show his different side to viewers on Khatron Ke Khiladi 12. Rajiv had entered Bigg Boss 15 as a wild card contestant and now he is keen to show his daring skills on the stunt-based reality show.

(The above story first appeared on LatestLY on May 05, 2022 04:42 PM IST. For more news and updates on politics, world, sports, entertainment and lifestyle, log on to our website latestly.com).