Koffee With Karan 6: Rana Daggubati Opens Up About His Break Up With Trisha; Prabhas Clears the Air on His Dating Rumours With Anushka Shetty – Watch Videos

Koffee With Karan 6 airs every Sunday at 9 pm on Star World. 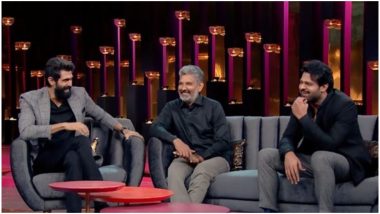 It's a first! The stars from the Southern film industry, Prabhas and Rana Daggubati finally grace the Koffee With Karan couch along with director SS Rajamouli. It's definitely a special evening for Baahubali fans, isn't it? Also, it is is a big achievement for Karan to have Prabhas, Rana and SS Rajamouli on his show Koffee With Karan. Yes, you read that right! Karan, whose production house distributed Baahubali 2 earlier this year, reveals that it was a task to get the trio on the sets of the talk show and that he had to beg and plead Rajamouli and Prabhas to come on board. Koffee with Karan 6: Prabhas and SS Rajamouli Copying Karan Johar’s Pout Is the Best Thing on the Internet Today – Watch Video

The filmmaker, while in conversation with Rana, also recalls how the latter had earlier told the talk show host that Rajamouli and Prabhas might not end up coming on the show as they are extremely shy personalities. From Rana Daggubati’s past with Trisha Krishnan to SS Rajamouli sharing his thoughts on why he thinks Rana will marry before Prabhas, here I bring some of the hot highlights from tonight’s episode.

It's known fact that Karan has this innate ability to put one in a fix by making them answer some really awkward, embarrassing and personal questions. Just like always, the filmmaker asks Rana about his break up with Trisha but the surprise element was that the actor does not ship or dodge the question but for the first time, opens up about why it never worked out with Trisha. Rana said, "She's been a friend of mine from a decade. We have been friends for very long and dated for a little time. But I guess, things didn't work out."

Prabhas too clears the air around the dating rumours with Anushka Shetty, who has been his co-star in Baahubali. Theactor said, "No, If any two people will work together for two years, of course they will be linked. But I wasn’t dating Anushka. Ask Raj (Rajamouli) if you want." Rana too confirmed that the two weren't dating.

Meanwhile, SS Rajamouli feels Rana will marry before Prabhas and here's why! Explaining why, the Baahubali director added, "Rana is so structured everything has to be broken into structures and pieces for him. His whole life is like 1-10 years, 10-15 years, 15-20 years. Marriage is an aspect, a box to be ticked. That will get ticked. I don’t know whether that marriage will last or not, but it will get ticked (laughs)."

For the first time on television, the superstars from the South grace the Koffee couch! In conversation with @ssrajamouli, @ranadaggubati, and #Prabhas next Sunday on #KoffeeWithKaran. #KoffeeWithTeamBaahubali #Baahubali #Prabhas #Rana

Leave it to @karanjohar to ask these perfect gentlemen, the perfectly wrong questions on #KoffeeWithKaran. #KoffeeWithTeamBaahubali #Baahubali #Prabhas #Rana

Karan Johar's show is in its season 6 and has featured distinctive pairs of celebs till now. The last week’s episode, for instance, had Vicky Kaushal and Ayushmann Khurrana as guests, while in the upcoming week, Karan Johar's Koffee with Karan Season 6 is all set to host the siblings Sonam Kapoor, Rhea Kapoor and Harshvardhan Kapoor. Koffee With Karan 6 airs every Sunday at 9 pm on Star World. Watch this space for further updates.

(The above story first appeared on LatestLY on Dec 23, 2018 09:57 PM IST. For more news and updates on politics, world, sports, entertainment and lifestyle, log on to our website latestly.com).