With the first half of Loki completed, episode three got us a lot of new revelations related to Loki’s story. Developed by Michael Waldron for television, Loki stars Tom Hiddleston as the titular character, as his story picks right after him escaping from the 2012 timeline in Avengers: Endgame. 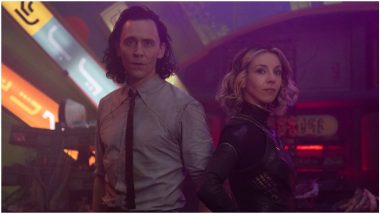 With the first half of Loki completed, episode three got us a lot of new revelations related to Loki’s story. Developed by Michael Waldron for television, Loki stars Tom Hiddleston as the titular character, as his story picks right after him escaping from the 2012 timeline in Avengers: Endgame. He is quickly brought into the Time Variance Authority (TVA) as his escape causes a fracture in the sacred timeline. He is then brought in by Mobius M. Mobius played by Owen Wilson who asks his help in taking down the Loki Variant who has been going around and causing trouble in different timelines. Loki Episode 3 Ending Explained: Decoding What Happened to Loki & Sylvie, and TVA’s Big Secret From Tom Hiddleston’s Marvel Series! (SPOILER ALERT).

Loki just had its third episode premiere, and it has answered a lot of questions that we had after the previous week’s episode. With only three more episodes left to go, we are taking a look at three of the biggest revelations from the third episode of Loki. Loki Episode 3 Song Dark Moon: From Artiste to Lyrics, Know More About Track Played During End-Credits of Tom Hiddleston’s Marvel Series (LatestLY Exclusive)

This has been a long time coming as Loki is a shapeshifter and in the Norse mythology he is considered as gender fluid. We finally got an answer to this as in the personal details document of Loki his gender was stated as Loki. It’s great to see Marvel diversifying its portfolio of characters as it represents some of its more LGBTQ+ characters rather than just keeping them on the sidelines.

With the first two episodes focusing heavily on who the Loki variant is, we got an answer for it at the end of the second episode. With many of us theorizing that it was Lady Loki played by Sophia Di Martino at the end of episode two, the third episode revealed her to have the name of Sylvie. Now the interesting thing here is that Sylvie is the name of the second Enchantress in the Thor comics, and with her referring to her powers as enchantment, it has us speculating if Lady Loki is just Enchantress in disguise. It would be a great addition to the rogues in the MCU since Enchantress is one of the biggest Thor villains from the comics. She also reveals that she has been on the run for so long that she hardly remembers her mother. Considering 'Gods' live for centuries, that has been quite a long run! Unless she is lying of course!

Everyone in TVA Is a Variant

With episode three of Loki it even revealed to us that literally everyone in the TVA is a variant, and not people who were specifically created by the Time Keepers. It has us thinking now if the Time Keepers are even real or is it just some elaborate lie by a more sinister mind at the top? Whatever it might be, it for sure has us excited for the last three episodes of Loki.

(The above story first appeared on LatestLY on Jun 23, 2021 09:54 PM IST. For more news and updates on politics, world, sports, entertainment and lifestyle, log on to our website latestly.com).