Maharani talks about a time in Bihar politics that shocked and surprised the entire country. Although makers are denying that it has anything to do with Rabri Devi and Lalu Prasad Yadav government, the crux does point at a similar instance. Huma Qureshi, Amit Sial and Sohum Shah's performance make it an interesting watch 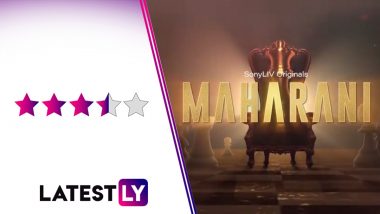 Maharani review: There was something about the political tug-of-war before the social media boom. All 'saam, daam, dand, bhed' (persuade, purchase, punish, and exploit) used to happen on the ground because social media was nonexistent. Hence tricks or treats were all physical moves rather than toolkit machinery. Bihar has been the frontrunner of many political upheavals in that decade. But the one that stands out is Lalu Prasad Yadav giving his CM's chair to his unwitting wife Rabri Devi after his name was linked to the Fodder scam. Maharani takes the gist of the same without making any references to the political incident and delivers well. But the ending doesn't justify the means. Maharani Trailer: Huma Qureshi As Rani Bharti Stuck in the Political Chaos Looks Powerful; Series to Premiere on Sony LIV From May 28 (Watch Video)

Bheema Bharti (Sohum Shah) is an exception to politics. In a casteism-infested state like Bihar, a member of the backward class becoming the Chief Minister doesn't bode well for many. The rebellion begins within his party with Health Minister Naveen Kumar (Amit Sial) looking for means to grab the chair by hook or by crook.

During Chhath Puja, Bheema gets shot while performing the ceremony with his wife Rani (Huma Qureshi). That brings about the most awkward and displacing moment in Indian politics. To not relinquish his hold on the CM's chair, Bheema appoints his wife, the unassuming housewife Rani to succeed him after the accident leaves him bedridden. The motive is to keep the power in the family but Rani decides to shock many and leave others in awe.

Maharani doesn't miss a beat and dives straight into the caste politics of Bihar. How one community is always vying for the blood of those considered lower in status and vice versa is established in the initial 20 minutes of the first episode. You know exactly what you are going to be served in the rest of the show. In seven episodes, the writers have taken time to develop each and every plot point with utmost precision.

What works for most parts is the vulnerability of Rani. The Legislative Assembly scene where everyone laughs at her for being completely out-of-place or the moment where her illiteracy becomes the subject of sneering during her swearing-in. Such scenes are very delicately and smartly developed to give the audience an understanding of what Indian politics is.

The slow-burn pace of the thriller works well for major parts as there are several subplots that are interwoven. A rushed screenplay would have mired the experience. However, the emphasis on these subplots is so immense that the characters lack depth. Rani's vulnerability and ignorance needed to have been explored more to show how at sea she felt. She seems to recover from these initial hiccups quite easily despite never being anywhere close to politics. In her speech, she mentions if a woman can run a family, she can also run a state or a country. This analogy is not explored at all which I feel is a lost opportunity.

Naveen Kumar played by Amit Sial, Bheema's unapologetic rival is relegated to someone who issues empty threats and sits on dharnas. He shows more teeth than can actually bite. This character is never allowed to bloom to actually be a worthy political rival.

If that's not enough, the underwhelming ending does spoil the fun. You are prepped to see major turbulence once Bheema feels fine enough to take back his chair, especially after Rani's supposed faulty decisions. But nothing of the sort happens. If it's done in favour of a second season, the insipid ending still doesn't justify it. Army of the Dead: Was Huma Qureshi’s Death Scene Cut Short By Recasting Decision in Zack Snyder’s Film?

Check out the trailer of Maharani

One of the biggest assets, I would say, of web series is its casting. Maharani too benefits immensely from the same. Huma as Rani is quite convincing with her innocence first and courage to defy later. She shoulders the transformation really well. Amit Sial, despite getting a myopically written character like Navin, shines effortlessly. Every time he is on screen, you detest him. Sohum Shah, notwithstanding the constraints of his character, gives a highly nuanced performance to show what Bheema, who is considered the leader his caste is looking up to, really wants. Limited utilisation of the fabulous Kani Kusruti does hurt though.

Maharani is a must-watch for everyone who isn't aware of how politics in Bihar of the past, before Uttar Pradesh took over as the state making the most headlines. Maharani is streaming on SonyLIV.

(The above story first appeared on LatestLY on May 28, 2021 11:30 AM IST. For more news and updates on politics, world, sports, entertainment and lifestyle, log on to our website latestly.com).