Mehek finally pays for being the black sheep of his gang 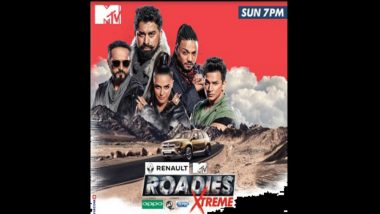 Today's episode of MTV Roadies Xtreme starts with Shruti and Rohan's cute moment as Shruti observes that she is blessed to have a friend like him. The plotting begins for the vote out. Shruti and Rohan become the targets, but Mehak refuses to vote for Kashish and comes into the hit list of his own team.

At the vote out arena, Rannvijay speaks about the slapping task where Kashish and Sharan were clearly targetting each other. The vote out begins, and the gangs vote. The initials votes though are for Shruti, but soon the chances for Mehek looks bleak as one by one it adds up to nine votes.

Mehek realises that he has been voted out by his own gang members. Nikhil Chinapa feels furious too as he asks his gang why they have not concentrated on Neha's gang. Sharan ends up in an argument with Mehek as Kashish too jumps in.

Kashish takes Mehek's side and fights away to all glory with Abhishek and Sharan. Kashish makes a statement that Mehek is one of the bestest friends anyone could have. Neha and Prince continue their war as Neha walk off from the scene and Prince says he does not regret anything that he said and he would say it all over again.

Next day at the task location they see the entire set up for a war zone complete with an active bomb. The task is where one of the team members will be bound to the bomb, and they sit waiting with a cutter so they can cut the wires. They are though blindfolded.

One of the team members will hang on a pulley waiting for the third who becomes the counterweight propelling the hanging one up so he or she can watch the wires and call out the order it has to be cut. This task involves the gang leaders too.

Raftaar's gang surprisingly comes first this time while Nikhil stands last just after Prince. Rannvijay gifts the gangs something amazing which is a tissue roll and two litres of water. The roadies are supposed to survive only on this per day.

(The above story first appeared on LatestLY on Jul 08, 2018 08:18 PM IST. For more news and updates on politics, world, sports, entertainment and lifestyle, log on to our website latestly.com).