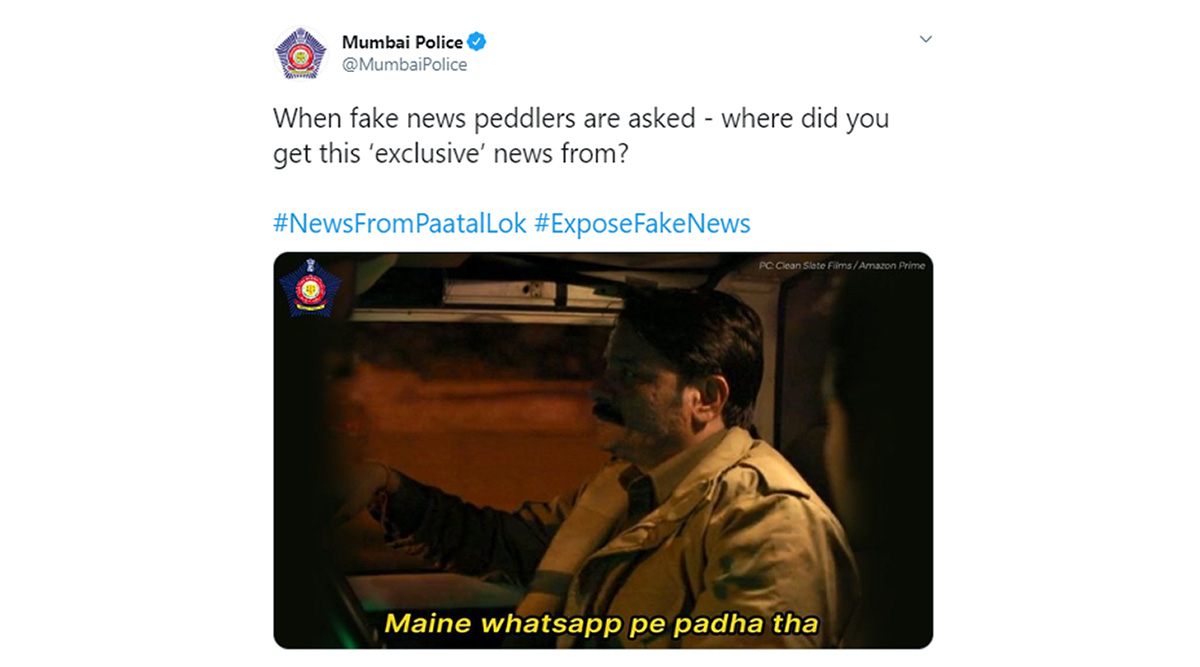 Kudos to Mumbai Police for the amazing work that they are doing to save our lives. And kudos to them to keep their social media and meme game strong too! The official Twitter account of them has been a blessing to the Twitterati with so much awareness spread in a less preachy manner and more trendy, funny manner. Now, they are catching up with desi viewer's new binge-watch obsession, which is Amazon Prime series-Paatal Lok backed by Anushka Sharma. They posted a new meme dedicated to fake news! Paatal Lok Funny Memes: Anushka Sharma-Produced Web Series Provides New Meme Templates Much to the Joy of Netizens.

Of course, Mumbai Police takes all the efforts to spread awareness against the fake news trend and fake news peddlers. However, looks like they have a long way to go to completely curb the trend.

The new meme posted by them is a scene from the series that features Jaideep Ahlawat in the role of a cop. In the scene, he says, "maine WhatsApp pe padha tha." (I read it on WhatsApp). Adding to this meme, the caption reads, "When fake news peddlers are asked - where did you get this ‘exclusive’ news from? #NewsFromPaatalLok #ExposeFakeNews."

When fake news peddlers are asked - where did you get this ‘exclusive’ news from?#NewsFromPaatalLok #ExposeFakeNews pic.twitter.com/SvHSgp4oJR

Speaking of Paatal Lok, Anushka's digital venture has sure worked in her favour. The critics and the fans are giving thumbs up to the series. Read our review here. Apart from Jaieep, the cast also includes, Neeraj Kabi, Abhishek Banerjee, Gul Panag and Swastika Mukherjee in the lead.