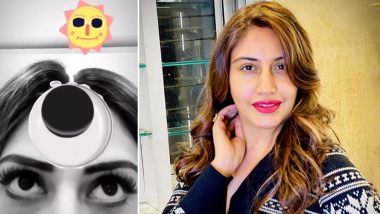 After seeing Hina Khan as the most powerful Naagin on Ekta Kapoor's supernatural show, the makers ahead have planned many surprises for fans. As sooner of later, it is going to be TV actress Surbhi Chandna who will enter the supernatural series. Chandna is supposed to play Hina's reincarnated form in the kalyug. Along with her, fans will also get to see Mohit Sehgal and Sharad Malhotra. Having said that, until now, the makers have kept Surbhi's part under wraps and have not even confirmed that she is part of the fictional franchise. But looks like the cat is finally out of the bag , as the actress just teased fans with her little look as the shape shifting serpent. Naagin 5: Mohit Sehgal Joins Surbhi Chandna and Sharad Malhotra In Ekta Kapoor's Supernatural Show?

The popular television star has already started shooting for the fifth season of Naagin as she shared a boomerang video from the sets. In the clip, one can see her maang tikka and also those brushed eyebrows and sharp eyes. With this, seems like a new promo of Naagin 5 will be coming to our screens soon. Well, after looking at the video, we can't wait. Naagin 5: Surbhi Chandna's Promo To Be Out Soon?

Check Out Surbhi Chanda's Video Below:

People : I Stan The Best

Aren't We All Lucky To Get Back Our Fav Again In Same Month "August"💃🌠 pic.twitter.com/eb6xJ2famr

After Ishqbaaaz and Sanjivani 2 fans will see Surbhi Chandna in a venomous avatar. This is the first time she will be playing such a role. Meanwhile, Hina as the serpent from the satyug has been loved by fans and they cannot keep gushing about her look. Stay tuned!

(The above story first appeared on LatestLY on Aug 13, 2020 08:52 AM IST. For more news and updates on politics, world, sports, entertainment and lifestyle, log on to our website latestly.com).