Colors' Naagin 5 premiered on August 9 to some great reviews. The show's storyline has begun with the backstory of Hina Khan, Dheeraj Dhoopar and Mohit Malhotra. However, the show will soon take a leap with Surbhi Chandna, Sharad Malhotra and Mohit Sehgal taking over. 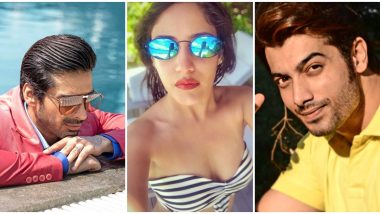 Colors' Naagin 5 premiered on August 9 to some great reviews. The show's storyline has begun with the backstory of Hina Khan, Dheeraj Dhoopar and Mohit Malhotra. The story sees Sarvashreshtra Naagin (Hina) fall in love with the naag Hriday (Mohit) but the villain in their love story is the cheel Aakesh (Dheeraj) who wants to possess the Naagin and her powers. However, this backstory will be seen for only a few episodes after which Surbhi Chandna, Sharad Malhotra and Mohit Sehgal will take over. Yes, you read that correctly. If reports are to be believed, then Mohit Sehgal has bagged the male lead role in the show alongside Sharad Malhotra. Naagin 5 Premiere Episode: Hina Khan As The 'Sarvashresth' Serpent Leaves Fans Wanting For More (View Tweets).

IWMBuzz quoted a source as saying, "Mohit will play the lead role in the show and his character name would be Jay. The actor will play a positive role in the drama." However, there are also reports of how actor Sharad Malhotra had bagged the part. But if these reports are to be believed, then looks like Naagin 5 will have two male leads. Naagin 5: Surbhi Chandna's Promo To Be Out Soon?.

However, looks like Mohit will be a pivotal part of the show (parallel lead). As for actor Sharad Malhotra, his character details have been revealed in a report in Tellychakkar. As per the reports, the actor will be seen in a negative shade in the initial episodes but his character will eventually turn positive. Well, excited??!!

(The above story first appeared on LatestLY on Aug 10, 2020 09:26 PM IST. For more news and updates on politics, world, sports, entertainment and lifestyle, log on to our website latestly.com).