'Netflix's The Crown Should Be Called A Work Of Fiction', Demands UK Cultural Secretary Oliver Dowden

The Crown season 4 has been apparently watched by more people than those who watched the royal wedding of Prince Charles and Lady Diana in 1981. No wonder the UK Culture Secretary wants Netflix to issue a disclaimer at the start of every episode. 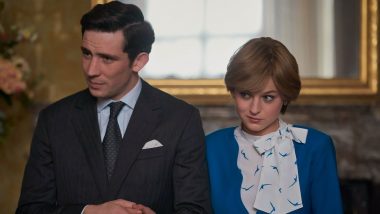 Netflix's The Crown has managed to captivate audiences across the world. The new season has been especially gratifying to many as it talked about Princess Diana and her tumultuous marriage with Prince Charles. Quite obviously, the depiction of the royal family in this series did ruffle a few feathers. The latest addition to that is UK Cultural Secretary Oliver Dowden's demand that the streamer issues a disclaimer at the start about the series being 'a work of fiction.' The Crown Season 4 Review: Emma Corrin’s Diana And Gillian Anderson’s Margaret Thatcher Deserve Applause But It’s Josh O’Connor’s Prince Charles That Keeps It Humane (LatestLY Exclusive)

Speaking to Daily Mail, Dowden said, "It's a beautifully produced work of fiction, so as with other TV productions, Netflix should be very clear at the beginning it is just that." He believes that it could give a damaging view of the family to the generation who was not present when the events took place.  He feels a whole generation may mistake fiction for facts. Dowden also reveals that he would be writing a letter to Netflix on the same.

Earl Spencer, late Lady Diana's brother, also voiced similar concerns when he told ITV, "It would help The Crown an enormous amount if at the beginning of each episode it stated that, 'This isn't true but is based around some real events'. Because then everyone would understand it's a drama for drama's sake."

All this happened after The Crown season 4 led to a lot of abuse instances. There are reports that Camilla Parker-Bowles, Prince Charles' second wife, has received a lot of abusive messages and so did some of the other members of the royal family.

(The above story first appeared on LatestLY on Nov 30, 2020 03:08 PM IST. For more news and updates on politics, world, sports, entertainment and lifestyle, log on to our website latestly.com).