Obi-Wan Kenobi is all set to premiere on Disney+ Hotstar this week. The series stars Ewan McGregor, Hayden Christensen, Joel Edgerton, Moses Ingram and more. Here's all you need to know about the series. 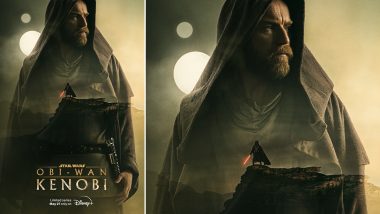 After a bunch of demand from fans, and actors themselves, Obi-Wan Kenobi premieres on Disney+ this Friday. The Star Wars spinoff has been hyped up majorly by many, and the event has been anticipated for a really long time. With everyone's favorite Jedi set to make their return this week, here's all you need to know about Obi-Wan Kenobi. Obi-Wan Kenobi Trailer: Hayden Christensen Returns as Darth Vader in Ewan McGregor-Starrer Series (Watch Video).

The series will take place ten years after Star Wars: Episode III - Revenge of the Sith. It will feature Obi-Wan hiding on Tatooine and being hunted by the Inquisitors, who are set up Darth Vader.

Watch the Trailer For Obi-Wan Kenobi

Obi-Wan Kenobi is set to be a six-episode event, with all of them being directed by Deborah Chow.

Where to Watch Obi-Wan Kenobi

The first two episodes of Obi-Wan Kenobi will premiere on May 27, 2022 on Disney+ Hotstar. From there on, the series will follow a weekly release schedule. Obi-Wan Kenobi: New Still of Ewan McGregor’s Character Released by the Film Magazine (View Pic).

Reviews for Obi-Wan Kenobi aren't out yet. When they are, the article will be updated with it.

(The above story first appeared on LatestLY on May 23, 2022 03:27 PM IST. For more news and updates on politics, world, sports, entertainment and lifestyle, log on to our website latestly.com).