As the Roadies Revolution 17 journey gets rockier by the day, the newly made permanent teammates are finally making peace internally and elevating their bonds to spruce up the game. 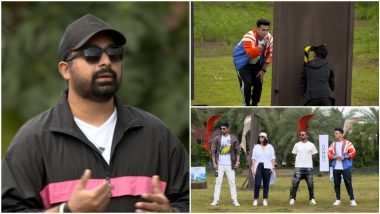 As the Roadies Revolution 17 journey gets rockier by the day, the newly made permanent teammates are finally making peace internally and elevating their bonds to spruce up the game. As they pace their way up to the semi-finals, the contestants and the leaders are playing safe to stay in the game. While we saw Apoorva and Nisha’s exit from the show last week, this week, Rannvijay Singha hits back at the contestants again with a surprise vote out post a survival task. Roadies Revolution 17: Prince Narula Returns To the Show After Hiatus, Says 'Ab Jo Ude The, Unko Udaaenge'.

The survival task of the week will be called– Dum Laga Ke Charades in the typical Roadies style. Two teams will have to compete against each other and hence alliances will be formed. Neha Dhupia will be seen pitching to his buddy Prince Narula now that he is back, to form an alliance. This week, the audience will also see Neha and Prince vs Nikhil Chinappa and Varun Sood. Both Varun and Prince have lost one member from their teams each, but are standing strong with 2 teammates. Roadies Revolution 17: Rannvijay Singha Gives Neha Dhupia An Upper Hand to Choose Her Team’s Captain.

The task will involve multiple stages, but the crux would be to enact Bollywood movies and guess the same. As Prince and Neha are the biggest Bollywood buffs amongst the troop, will this task prove to be an advantage for them, or will they lose this golden opportunity?

While the task is running, viewers will see Prince lashing out on Aman. Additionally, Neha and Nikhil will also be seen getting into a war of words as Neha feels the latter always talks about ideal behaviour but when it comes to his team, he supports them otherwise. The matter is sure to heat up on the task location.

(The above story first appeared on LatestLY on Dec 26, 2020 03:05 PM IST. For more news and updates on politics, world, sports, entertainment and lifestyle, log on to our website latestly.com).