Roadies Revolution 17: Team Favorites Get a Chance to Snatch 3 Immunities From Team Underdogs

After the shocking yet well-deserved win of Team Underdogs in the last task's episode of Roadies Revolution season 17, they finally proved that they should not be taken lightly. Will 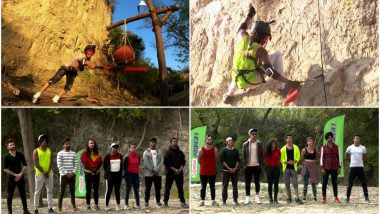 After the shocking yet well-deserved win of Team Underdogs in the last task's episode of Roadies Revolution season 17, they finally proved that they should not be taken lightly. Will the Team Favourites still be the ‘favourite’ ones in the eyes of the celebrity leaders now? Will the tables turn? This week’s task will blend adventure and entertainment in its entirety! This one is going to be a fierce battle again with Team Underdogs and Team Favourites. Which team calls it a win? Roadies Revolution 17: Gang Members To Be Divided Into 2 Teams - Underdogs Vs Favorites.

Additionally, Zabi and Srishti are stuck in the middle as they do not belong to any team. Will they get a chance now or with a heavy heart, have to sit out of their tents during this task as well? Only time will tell. This week, Rannvijay starts the episode by introducing a three-stage task named 'Latka Matka ya Jatka' which gets everyone excited owing to its sporty and adventurous nature. The task involves rock-climbing, rappelling and breaking pots.

The Underdogs are leading by winning the last task and will have to defend 3 immunities which the Favourites can snatch if they win this task. Bringing another twist in the tale- only 3 contestants get to perform from each team and Rannvijay, by all means will amplify the difficulty even more! Roadies Revolution 17: Double Eviction and Many Other Surprises Await the Contestants This Week.

Team Favourites choose Kevin, Michael and Aakash while Team Underdogs choose Abhimanyu, Aman and Hamid to perform the task. It will definitely be a visual treat to watch these high rated contestants take over this episode and task but who will take home immunities for their team? Will Hamid and Abhimanyu be a surprise package like the last task or the favourites will take the ball in their court?

While everyone is hyped up about the task, Zabi gets emotional and Rannvijay along with Neha are seen comforting him. What do you think would have happened? While on the other hand, Hamid and Michael will be showered with praises!

(The above story first appeared on LatestLY on Oct 14, 2020 04:09 PM IST. For more news and updates on politics, world, sports, entertainment and lifestyle, log on to our website latestly.com).