Roadies Revolution 17: Gang Members To Be Divided Into 2 Teams - Underdogs Vs Favorites

After last week’s nail biting confrontational episode between Apoorva Arushi and the Battleground contestants, this week comes up with fun task on the most common occupation in Rupnagar, Punjab – Traditional Farming. 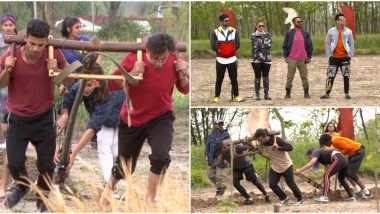 After last week’s nail biting confrontational episode between Apoorva Arushi and the Battleground contestants, this week comes up with fun task on the most common occupation in Rupnagar, Punjab – Traditional Farming. Rannvijay, talks about the problem of Air Pollution in India and one of its alarming factors – crop stubble burning. He then shows a Stubble Removing Machine (SRM) made by Harman Deep and Fateh Singh, two students from Indian Institute of Technology, Ropar. The Roadies and Gang leaders get head on to know the task and get into the game. Roadies Revolution 17: Permanent Rivals Arushi and Apoorva Compete for Survival.

And we all know that no task is complete without a surprise element! For this one too, Rannvijay informs the Neha, Nikhil and Varun to choose one favourite Roadie apart from their captains. Prince doesn’t get this option as apart from his captain, Apoorva has become a permanent member of his team since he sacrificed a star for her. Roadies Revolution 17: Double Eviction and Many Other Surprises Await the Contestants This Week.

This week, the money won from the task will go to Harman Singh and Fateh Singh to help farmers with the Stubble Removing machine which will eventually help in reduction of Air Pollution. Moving further in the episode, Rannvijay introduces the task - Halke Mein Math Lo, which adds to the local touch of Rupnagar – Farming.

Two teams of eight members each will be playing the task. The Leaders have already chosen their favourites, which would be one team and the rest fall under the ‘Underdog’ team. The Underdog team will have to make a unanimous decision of keeping aside two Roadies, who wont take part in the task and will not even get a chance to see it. Excited to know who’s in team Favourites, Underdogs and the two unlucky Roadies?

Rannvijay further explains the two part task where they have to plough the field using traditional tools and cover as many lines as possible and finally connect two types of coins which hold different values. Team with the highest points wins the task and get the immunity. Will the Favourites prove as to why are they The Leaders’ Favourites or the Underdogs will prove that the favourites should not take them lightly. It’s definitely going to be a scene to witness.

The episode ends on a fun note when Prince tells one of the contestants “Bulati hai magar jaane ka nahi”. Who did he say this to and why? Not to miss the aww-dorable moment when Kevin speaks up that he is so proud of Arushi and states “That’s my girl”.

(The above story first appeared on LatestLY on Oct 08, 2020 07:05 PM IST. For more news and updates on politics, world, sports, entertainment and lifestyle, log on to our website latestly.com).