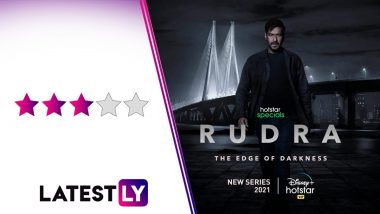 Rudra Review:  Ajay Devgn and his craft are much celebrated for the proverbial thehraav, his brooding mannerisms, and unmissable subtleties. Seldom do you see Devgn in a hurry to prove a point or two. He has mastered the craft of growing slowly on you in all these years. Quite interestingly, his OTT debut captures the raw, the real and the slow-burn facets of the brand Devgn to dish out a treat that might test your patience with its simplistic nature, but in the end you will not be disappointed for investing your time and interest level. Director Rajesh Mapuskar brings the Indian adaptation of the population international webseries Luther and crafts it in a manner that can hold your attention and make you think as you track the story backward after connecting the dots, long after each episode has ended. Rudra Title Track Inaam: Ananya Birla’s Mesmerising Voice Adds A Punch To Ajay Devgn’s Tryst With Darkness (Watch Video).

Yes, Rudra is episodic, every capsule is a fresh case, as our troubled cop Rudra has decidedly toed the line and subverted every rule in the book. He uses his own methods that are questionable if one sees it from the ethical lens, but equally interesting if you are involved as an audience cinematically. Rudra is suspended for breach of conduct. He has been summoned in the department for only he can decode and probably solve every convoluted case in the city. Even though every episode is a fresh start as far as resolving the cases is concerned, there's a common thread that runs through the series that unravels Rudra the person and the persona. The flawed cop and the vulnerable hero-the spectrum is wide!

The central plot is meaty enough to get you hooked, but the series' ability to sustain that much-desired interest level is largely questionable. In fact, it somewhat wavers. While some episodes may come across as refreshingly new, some chapters fail to surprise you with their premise. And yet the treatment and the texture of this endeavor remains majorly impressive. Mapuskar creates a world that remains diligently dark and complex, he then throws talents like Devgn, Ashwini Kalsekar, Atul Kulkarni, Raashi Khanna and Aashish Vidyarthi who hold the immense ability to keep the narrative taut and intriguing with their performances.

The maximum city Mumbai has been used as not just a complex backdrop infested with crimes to evoke thrills, but it has been smartly employed as a character in itself. So from cops being butchered one by one, in what may seem like an international terror plot to a painter accused of killing young women to fuel his 'bloody' artistic passion, the initial episodes of Rudra is a mixed bag in terms of narration and the characters involved. Each chapter is laced with drama that unfolds at as sluggish a pace as Devgn's famous slow walk. But hey, it remains damn interesting, especially for the minds that like to backtrack the story and complete the jigsaw puzzle piece by peice to get the larger picture. Rudra The Edge Of Darkness Review: Ajay Devgn’s Disney+ Hotstar Web Series Gets A Thumbs Up From Critics!

Mapuskar treads an interesting zone that spells totally Luther in his narration but unfolds more in the zone of Sherlock when it comes to decoding the cases in a dramatic way. Of course, Rudra is no intellectual largest or a mathematical genius with an affinity for microscopic details. He is flawed and has his own demons to deal with, but he has his own methods that work for him in his professional capacity. And this balance of 'yin and yang' has been interestingly employed by the maker and astutely played by Devgn.

Rudra is highly impressive with its scale as indeed with its design. It is well-paced and nicely mounted to give us a fine watch largely dominated by noteworthy performances in episodes that are raw, slow-burn and intriguing. Amidst all this 'delicious darkness' Devgn rules and roars! Rudra - The Edge of Darkness is streaming on Disney+ Hotstar.

(The above story first appeared on LatestLY on Mar 04, 2022 03:14 PM IST. For more news and updates on politics, world, sports, entertainment and lifestyle, log on to our website latestly.com).