Sarabhai vs Sarabhai Is Being Remade in Pakistan, Show Writer Aatish Kapadia Calls the Blatant Word To Word Copy 'Cringy' and Actors 'Pedestrian' 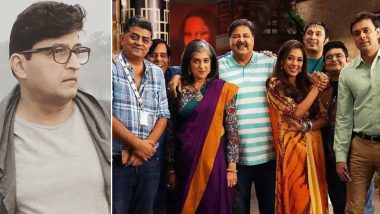 Sarabhai VS Sarabhai Being Remade in Pakistan (Photo Credits: Instagram)

Indian Television sitcom Sarabhai VS Sarabhai was, is and always be iconic. And while spoofs and imitations of the show are one thing, blatantly making n unofficial remake of the show and failing spectacularly, is another thing altogether. And apparently, some folk from Pakistan have achieved this feat- of making a really cringy remake of Sarabhai VS Sarabhai. This was brought to light by the show's writer Aatish Kapadia, who in a Facebook post, called out the cheap copy of his show. From Social Distancing to Fake WhatsApp Forwards, Mumbai Police Dishes Out Sarabhai V/S Sarabhai Memes to Spread Awareness Amid COVID-19 Outbreak (View Tweet).

Aatish took to Facebook and wrote, "Morning began with a forwarded video link. I opened it and saw a ‘word to word’ ‘frame to frame’ unofficial remake of our show ‘Sarabhai vs Sarabhai’. By someone from our not so amicable neighbours , to our west. It has been shamelessly put on a free video streaming platform and the actors have performed my written word so badly, (they’ve even added their own pedestrian bit) that I cringed!" Satish Shah Birthday: Do You Remember These Savage Indravadan Sarabhai Dialogues?.

He continued to write, "I mean getting inspired and having made a show on the lines of Sarabhai vs Sarabhai is understandable. Khichdi had inspired many makers to come up with a show on the lines of Khichdi. The problem of course was that they didn’t understand the logic behind creating those illogical people. Similarly, inspired versions of Sarabhai have got it wrong, because they thought it was a show only about class conflict; which was just one aspect of it. Written by using inversion as a tool. But this blatant copy!??? My god it’s appalling. My request to my friends is to NOT give that show ‘views’ , by chance you’ll come across that daylight robbery. So much for copyright! And I don’t mean the technical copyright. I mean the shameful lack of conscience that those thieves displayed while lifting the show , lock stock and barrel! Waiting for poetic justice, if there’s any. 😊😊😊 P.s imitation is the best form of flattery. But lack of permission before illegal imitation is amorality."

(The above story first appeared on LatestLY on Dec 16, 2020 05:34 PM IST. For more news and updates on politics, world, sports, entertainment and lifestyle, log on to our website latestly.com).