After Bigg Boss OTT, Shamita Shetty took part in Salman Khan hosted reality show Bigg Boss 15 in which she was unable to make it to the top three. However, the Bollywood actress played a dignified and classy game throughout her stay inside the BB house. Rise and shine! 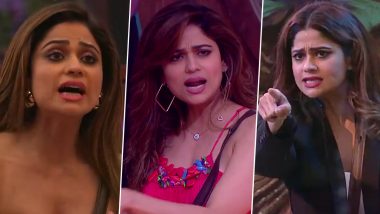 Shamita Shetty, who participated in Bigg Boss 15 won hearts by being REAL on the reality show. Even though she didn’t lift the winner’s trophy, the “Sharara” girl received immense support from celebs and fans. Often tagged as Shilpa Shetty’s sister, via BB 15 Shamita proved that she also has her own identity and is a strong individual. If you’ve followed her from Bigg Boss OTT, you’ll know that she’s fierce and a no-nonsense girl. FYI, on BB 15, Shamita faced a lot of personal attacks, was age and body shamed, but she overcame it all like an ultimate queen. Bigg Boss 15: Shilpa Shetty Says It ‘Boils Down to Manners’ As She Slams Tejasswi Prakash Over Her Aunty Dig at Shamita Shetty – WATCH.

And as SS celebrates her birthday today (February 2), we bow down to her for playing the game of Bigg Boss with utmost dignity and class. On this special occasion, we take a look at the top five moments of Shamita when she roared like a tigress on Bigg Boss 15. Check it out. Shamita Shetty Style File: 7 Looks of Bigg Boss 15 Star That Reflects Her Chic Fashion!

During a verbal argument between Shamita and Afsana, when the latter threw a chappal and hurled abuses on the former, Shetty lost her cool and gave it back in her own style to the singer.

When The Actress Roared

Shamita always spoke her mind and never kept mum on the reality show. After constantly getting targeted by wild card Devoleena Bhattacharjee, Shamita blasted at Devo during a task. This also led to Shamita getting fainted in Karan Kundrra’s arms.

When Abhijit Bhichukale called Shamita ‘pair ki jutti’, she slammed the former for his nasty remark. During the Weekend Ka Vaar, she even appealed to Salman Khan that she would like to quit the show and is not here to be insulted. Shamita Shetty Replies to a Tweet Which Claims Tejasswi Prakash Won Bigg Boss 15 As She’s the New Naagin.

It was during the ticket to finale task when Shamita could not take the biased gameplay of Rakhi Sawant and screamed at her. Their argument went next level wherein Shetty even pushed Sawant who was getting way too close to her.

When Shamita Shetty Was Age-Shamed

Last but not the least is the incident when Shamita was tagged 'aunty' by Tejasswi Prakash and age-shamed. Teja's comment angered Shetty and after the task, she yelled and showed Tejasswi what’s it’s like to take panga with her.

That’s it, guys! Shamita Shetty was indeed one of the most loved players on Bigg Boss 15  who definitely will be remembered for her badass game. Here’s wishing her a lot of success and a very happy birthday. Stay tuned!

(The above story first appeared on LatestLY on Feb 02, 2022 08:11 AM IST. For more news and updates on politics, world, sports, entertainment and lifestyle, log on to our website latestly.com).