He also added that he had a few family friends whose kids wanted to get pictures clicked with her as they love her, however, when he requested Shehnaaz to come and meet them, she refused saying that there will be too many people. 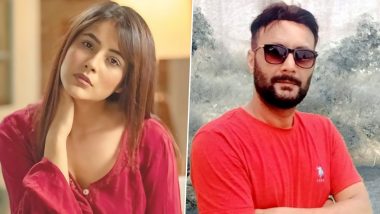 It looks like all is not well between Bigg Boss 13's Shehnaaz Gill and her father Santokh Singh. Shehnaaz's father has expressed his resentment towards her daughter's attitude and sworn that he will not speak to her going forward. He is upset that despite Shehnaaz visiting her hometown, she could not come and meet her family and spend some time with them. Bigg Boss 14 Contestant Shehzad Deol is Huge Admirer of Shehnaaz Gill, Says He's Proud That She is Fellow Punjabi.

Shehnaaz's father told Tellychakkar.com, "Shehnaaz shot in Chandigarh and did not come to meet her own family who live just two hours away from where she was staying. I came to know about her shooting in Chandigarh also through the media reports and not by her personally. Her grandfather has recently undergone a knee operation but she did not bother to at least pay a visit and check on him."

He further stated, "Now we don't know when will we get a chance to see her again as it is not very often that she comes up north to shoot or visit! I do not have her manager’s contact number too to reach out to her. In fact, I have sworn never to speak to her for life." Shehnaaz Gill Is Totally Clueless About 'Rasode Mein Kaun Tha!'

He also added that he had a few family friends whose kids wanted to get pictures clicked with her as they love her, however, when he requested Shehnaaz to come and meet them, she refused saying that there will be too many people. "She doesn’t have time for that, she said. She should at least meet her fans in Punjab if she has come here," concluded Santokh Singh.

As you may already know, Shehnaaz is in Chandigarh with Sidharth Shukla to shoot for yet another music video.  In a recent video that viral in no time,  we see Shehnaaz dancing and grooving with Tony Kakkar and Sidharth.

(The above story first appeared on LatestLY on Nov 11, 2020 10:58 AM IST. For more news and updates on politics, world, sports, entertainment and lifestyle, log on to our website latestly.com).