Shehnaaz Gill’s Phone Wallpaper Is a Photo of Hers With Sidharth Shukla and Their Fans Are Going Crazy!

Shehnaaz Gill is an internet sensation. Be it her stylish pictures or music videos, fans just love her to the 't'. Having said that, a latest photo of the actress' phone wallpaper has gone viral on the internet and well it has a SidNaaz connection. Check it out. 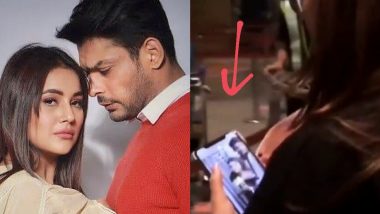 Shehnaaz Gill is an internet sensation. Be it her stylish pictures or music videos, fans just love her to the 't'. While rumours have it that she is dating BB 13 winner Sidharth Shukla, but nothing f sorts have been made official by the two yet. Last year in December, the pair were also in Goa for a shoot where they had partied hard. Having said that, a latest photo of the actress' phone wallpaper has gone viral on the internet and well it has a SidNaaz connection. Honsla Rakh First Poster: Shehnaaz Gill Collaborates With Diljit Dosanjh For A Punjabi Film!

The pic that is Shehnaaz's phone wallpaper is from the Diwali photoshoot of the couple where they both look fashionable in traditional attires. Gill was recently spotted at the Mumbai airport when fans noticed her cell phone's screen saver and they cannot keep calm. SidNaaz (Sidharth and Shehnaaz) admirers are going aww over the singer's gesture and also telling them to make their love official. Check out a few tweets below: Sidharth Shukla and Shehnaaz Gill Party Hard in Goa, Groove To 'Teri Bhabhi' Song (Watch Video).

We Love You Both of You Always😘😘 pic.twitter.com/17uEY23iaE

Shehnaaz is going to canada for 2 to 3 months and thats why i think Sid took 5 days off from the shoot of bbb3 ahh kullu peeche kese rahey ga?😂😭💚@ishehnaaz_gill @sidharth_shukla #Sidnaaz #ShehnaazInCanada #SidNaazian pic.twitter.com/Ennqb0hdKz

The fact that Shehnaaz Kaur Gill who changes her insta dp so frequently hasnt changed her wallpaper for soo long. Do you realize how special this picture is to her to them#SidNaaz pic.twitter.com/EnQQ1FGebP

I feel like a proud Mumma for both Sidharth and Shehnaaz ❤️❤️❤️

Our babiess are achieving so much and will grow much more.

The wallpaper 😭😭😭😭😭😭 i can't explain the happiness seeing that wall paper

God save them from all evil eyes

We love u #SidNaaz

We got a clear picture of the wallpaper.

For the one's who are not aware, Shehnaaz was kind of obsessed with Sid when inside the reality show. That's not it, as she had also confessed her pyaar for Shukla on national TV, but the man has termed their closeness as friendship. SidNaaz were seen in 'Bhula Dunga', 'Baarish' and 'Shona Shona' music videos together. Stay tuned!

(The above story first appeared on LatestLY on Feb 18, 2021 08:34 PM IST. For more news and updates on politics, world, sports, entertainment and lifestyle, log on to our website latestly.com).