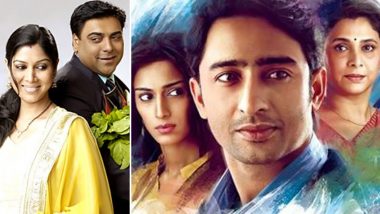 Sony TV might have never been on the top of the TRP game but its content was always top-notch and way better than most of the TRP grabbing shows. While a barrage of popular shows have been making their return to television amidst the on-going lockdown due to the Coronavirus pandemic, joining the bandwagon are two of Sony TV's most loved shows, Bade Acche Lagte Hai starring Ram Kapoor and Sakshi Tanwar and Kuch Rang Pyar Ke Aise Bhi which saw Shaheer Sheikh, Erica Fernandes and Supriya Pilgaonkar in the lead roles. Ekta Kapoor Celebrates 9 Years of Sakshi Tanwar-Ram Kapoor's Bade Achhe Lagte Hain, Nephew Laksshya Plays Signature Tune.

Here's When and Where You Can Watch The Show:

A post shared by Sony Entertainment Television (@sonytvofficial) on May 30, 2020 at 7:56am PDT

Bade Acche Lagte Hai was a mature love story that saw Ram Kapoor and Sakshi Tanwar in the lead roles. As Ram and Priya, the couple played a pair that marries in their 30s and faces life as it comes and was a very very very popular show with the masses.

A post shared by Sony Entertainment Television (@sonytvofficial) on May 30, 2020 at 7:12am PDT

Kuch Rang Pyaar Ke Aise Bhi was a show primarily based on the relationship of a mother Ishwari (Supriya Pilgaonkar) and son Dev (Shaheer Sheikh). With the entry of a woman Sonakshi (Erica Fernandes) into her son's life, the mother gets possessive and her behaviour affects Dev and Sonakshi. This show served as Erica's television debut and made her a well-known face in the industry. Well... excited??!

(The above story first appeared on LatestLY on May 30, 2020 11:46 PM IST. For more news and updates on politics, world, sports, entertainment and lifestyle, log on to our website latestly.com).