Anupam Tripathi speaking in Hindi in a Korean show...yes, it is true. The Squid game actor breaks into a long speech in Hindi in Just Between Lovers which stars Kpop band 2PM's Lee Jun-ho and Won Jin-A. The video is now going viral 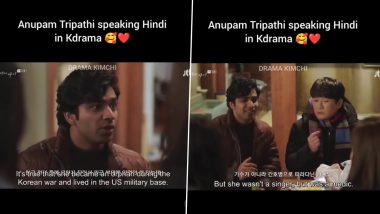 Kdramas were already getting bigger due to Netflix in last couple of years and in 2021, it just went better. The way Korean filmmakers and show makers are experimenting with content is mind-blowing. That's why the momentum after Squid Game didn't dip, in fact it has only become better. So there's Hellbound, Hometown Cha Cha Cha and more. Squid Game also gave us Anupam Tripathi, an Indian actor making waves in a hit Korean series. Anupam Tripathi In Squid Game, Kubbra Sait In Foundation – 7 Indian Actors Creating Waves In International Shows.

We all know that the actor has been part of several Kdramas and movies. But do you know he also spoke Hindi in one of them? A video of him speaking in Hindi in a Kdrama series is going viral. A fan shared this video from Just between Lovers which stars Kpop band 2PM's Lee Jun-ho and Won Jin-A.

Tripathi can be seen talking about Korean war and more in this video snippet. You can watch the series on Netflix. Check it out here: Squid Game: Anupam Tripathi, Indian Actor From Netflix’s Hit Korean Series, Has A Connection With Salman Khan’s Bharat – Here’s How.

Just Between Lovers is about three people who share the same tragedy - a building collapse. While working on a replacement structure, they exhibit the adverse way the incident altered their lives, relationships and they themselves. It's a impressive show that explores the repercussions of the tragedy not just physically or financially but also psychologically.

(The above story first appeared on LatestLY on Jan 10, 2022 08:17 PM IST. For more news and updates on politics, world, sports, entertainment and lifestyle, log on to our website latestly.com).