Television actress Sumona Chakravarti has expressed her disappointment over people not taking small screen actors seriously and comparing them to film stars. 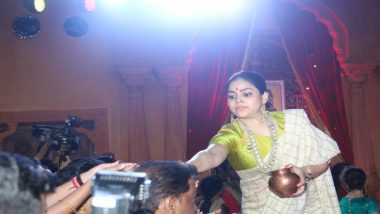 Mumbai, May 18: Television actress Sumona Chakravarti has expressed her disappointment over people not taking small screen actors seriously and comparing them to film stars.

Sumona, who is known for shows like "Bade Achhe Lagte Hain", "The Kapil Sharma Show" and "Jamai Raja" on Saturday posted a lengthy note on social media, pointing out the discrimination prevailing in Hindi showbiz against TV actors.

"From stylists saying that designers don't want to give their clothes to TV actors... to type casting us... to not even giving us the opportunity or considering us for film auditions and now for web shows. TV actors being pitted against unsuccessful film actors or just simply the ones who have played small character roles," Sumona wrote in the note.

Her post comes days after TV actress Hina Khan was mocked by a magazine editor for her debut appearance at the 72nd Cannes Film Festival.

Sumona also shared how she got rejected from getting roles in several projects because of the TV actress tag.

She wrote: "I know how many times my name has been turned down because I am a TV face. Arrey that girl is from 'Kapil...' show . No let's take film actor. It's just sad. Casting people are now telling TV actors to stay away from TV for a while if you want to get considered for web shows. You know what, f**k you."

"We are hard working actors. Not everyone comes from a business/filmy background. We all know the bitter truth of Bollywood (nepotism and casting couch is an existing reality. Let's not kid ourselves).

"An artiste is an artiste, irrespective of the medium. Respect," she concluded.

(The above story first appeared on LatestLY on May 18, 2019 08:13 PM IST. For more news and updates on politics, world, sports, entertainment and lifestyle, log on to our website latestly.com).