Popatlal may have given up the idea of working as a mechanic after an incident at the garage, but he hasn’t given up on looking for other opportunities. He sets eyes on a new job, that of selling vegetables. 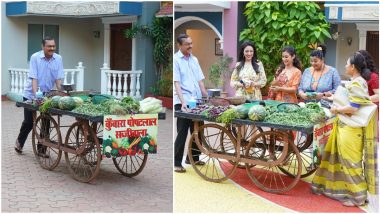 The upcoming episode of Taarak Mehta Ka Ooltah Chashmah will see Popatlal trying real hard albeit clumsily, to learn the ropes of car fixing. Sodhi has his back all the way but Popatlal is just not able to get a grip on the simplest of tools used to assemble or disassemble parts of a vehicle. In one such attempt to remove the screws of a tyre, he hammers the jack so hard that the hammer bounces off and flies off his hand. Not knowing on whose head it might come down on, everyone working at the garage ducks for cover and fortunately no one is hurt. But, after this incidence everyone working at the garage and also  Popatlal unanimously agree, that this job is definitely not meant for him. Taarak Mehta Ka Ooltah Chashmah Episode Update: Popatlal Turns Mechanic, Exchanges The Pen For A Spanner.

Popatlal may have given up the idea of working as a mechanic but he hasn’t given up on looking for other opportunities. Standing in his balcony, as he ponders over his options, he notices that Gokuldhaam Society’s Mahila Mandal is gathered around a vegetable cart. He notices that the woman selling the vegetables has no such special skills other than knowing the names of all the vegetables and their prices. Taarak Mehta Ka Ooltah Chashmah' Producer Asit Kumarr Modi Is COVID-19 Positive (View Tweet).

He also observes that seldom do any men step out to purchase vegetables. This gets him thinking. He could easily sell vegetables whilst chancing upon the opportunity to meet the woman who might just become his bride!

High on adrenaline, Popatlal is willing to go to any extent to find a job and if in the bargain if he lands himself a bride, it would mean the world to him. But does he really start selling vegetables and will he really push a cart? Will someone from Gokuldhaam Society catch his train of thought early and stop him from trying this adventure?

(The above story first appeared on LatestLY on Nov 23, 2020 06:16 PM IST. For more news and updates on politics, world, sports, entertainment and lifestyle, log on to our website latestly.com).