Tandav is all set to be premiered on Amazon Prime Video on January 15. The political thriller created by Ali Abbas Zafar stars Saif Ali Khan in the lead. 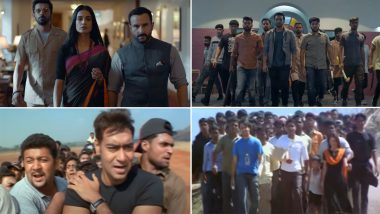 Tandav is all set to be premiered on Amazon Prime Video on January 15. The political thriller created by Ali Abbas Zafar stars Saif Ali Khan in the lead. It will bring forth the power and manipulation and uncover the darkest lanes of Indian politics. Ahead of the release of the web series, the makers have released a track titled “Dhakka Laga Bukka”. And this is the hit track from the film Yuva, released in 2004, which has now become a youth anthem for the upcoming web series. Tandav: Ahead Of Saif Ali Khan’s Web Series’ Premiere On Amazon Prime Video, Creator Ali Abbas Zafar Confirms About Season Two.

The song composed and crooned by AR Rahman along with Nakul Abhyankar for Tandav is power-packed, giving glimpse of the ‘YUVA’, set to face and deal with the corrupts in the world of politics. The video also highlights of what happens inside the closed, chaotic doors of politics. The music of the song and the lyrics definitely gives an electrifying effect to the entire political setup. The original track sung by AR Rahman, Karthik and Mehboob had become a huge hit back then. It had featured Ajay Devgn, Esha Deol and Vivek Oberoi. Tandav Trailer: Saif Ali Khan, Dimple Kapadia's Political Thriller Series Looks Suave, Powerful And Highly Dramatic, Sunil Grover Steals The Show (Watch Video).

(The above story first appeared on LatestLY on Jan 13, 2021 02:37 PM IST. For more news and updates on politics, world, sports, entertainment and lifestyle, log on to our website latestly.com).