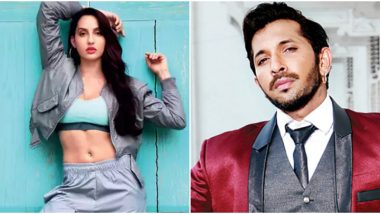 Did you come across a video of Terence Lewis brushing his hand against Nora Fatehi's butt? Well turns out it was morphed. Terence received the wrath of netizens when the same video of his touching her butt went online on the internet. The incident took place when Nora, Terence and Geeta Kapur were bowing down to whom we assume is a contestant in the show. While viewers were waiting for either Terence or Nora commenting on the issue, the duo has finally issued a clarification stating the video was morphed and none of such incident ever took place on the set. Yo or Hell No? Nora Fatehi's Shimmery Red Dress by Yousef Aljasmi.

Nora reacted to the incident saying, "Thank you Terrence! In today's time of social media video morphing and photoshop effect for meme purposes.. I'm glad you have not let it bother you and you have remained poised and dignified! This too shall pass. You and Geeta mam have been so respectful with me and have made me feel so loved and accepted as a judge on the show, it's been a great life learning experience! Stay blessed (sic)."

Check Out the Video in Question

This creep is Terence Lewis

He is doing this on tage to a known face...

Where are those Bollywood Feminists who mocked Sunil Gavaskar.?

Coming to Terence, the choreographer didn't exactly react to the incident but conveyed his thoughts through a picture. he shared a picture on Sunday wherein he carried her in his arms, thereby asking us to assume what we want while conveying his thoughts. India’s Best Dancer: Malaika Arora Shares Experience of Resuming the Dance Reality Show in Times of COVID-19.

Nora replaced Malaika Arora as the judge on India's Best Dancer after the latter tested positive for COVID-19. While Malaika has recovered from her illness, it's still unclear if she'll resume the shooting or will Nora continue as the judge of this season.

(The above story first appeared on LatestLY on Sep 28, 2020 10:02 PM IST. For more news and updates on politics, world, sports, entertainment and lifestyle, log on to our website latestly.com).