The Kapil Sharma Show: Kiku Sharda Refutes Rumours of Kapil Sharma Filming For His Show From Home (Details Inside) 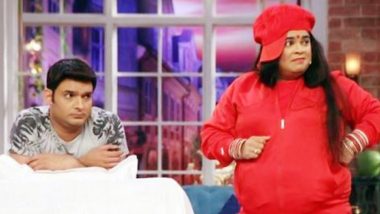 In the grim times that has come to be the COVID-19 pandemic, a few days back there was news that comedian Kapil Sharma will be shooting for episodes of The Kapil Sharma Show from home, just like the likes of Ellen Degeneres, Jimmy Fallon and Jimmy Kimmel, who have been shooting for their shows from home. And while all you TKSS fans who got happy listening to that piece of news, Kapil Sharma did squash all your expectations when he told a portal that he has no idea about any such plan, but he did mention reading about it. Kapil Sharma is 'Unaware' About Shooting New Episodes of 'The Kapil Sharma Show' From his Home.

And now, The Kapil Sharma Show cast member Kiku Sharda too has dismissed these reports about the show being filmed by the comedian from home. Kiku told ETimes TV, "I've not been informed about any such development. I don't think anything of this sort is going to happen."

Elaborating more on the why, Kiku continued, "The situation is bad in the country now and all we need to do is adhere to the rules of the lockdown. It will be foolish to gather 100 people together for a shoot when we have to strictly follow social-distancing. And shooting without the staff and important people is absolutely impossible." Kapil Sharma Birthday Special: From a Rejected Comedian to a Forbes Entrant, Here’s a Peek Into His Interesting Life!.

Kiku also went on to say that they would require at least a few crew members and could not film the show alone at their hoes with a single-cam setup.

"If we ever plan to shoot for TKSS there will be at least 50-60 people and we can't afford to do it at this point of time. There were talks in between if we should shoot TKSS without the audience and we chucked that idea because it is impossible to shoot in the scenario. The show cannot happen without the audience. So, whenever the lockdown comes to an end and everyone starts shooting we will always shoot, till then no shooting is happening," concluded Kiku. And for those who miss the show, the channel has been re-airing The Kapil Sharma Show's old episodes.

(The above story first appeared on LatestLY on Apr 14, 2020 09:49 AM IST. For more news and updates on politics, world, sports, entertainment and lifestyle, log on to our website latestly.com).