The Kissing Booth 2 Movie Review: Joey King's Elle Finally Gets The Character Arc She Deserves In This Sluggish, But Entertaining Sequel 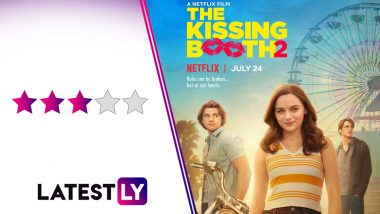 So the first movie ended with Noah (Jacob Elordi) hesitantly leaving for Harvard after spending a summer with Elle (Joey King). The latter is equally worried about their future. She decides to work on it by not being a clingy girlfriend and give Noah some space. Meanwhile, she spends her days with her best friend Lee (Joel Courtney) and his girlfriend Rachel (Meganne Young). In fact, she unwittingly hogs too much of Lee's time, bothering Rachel a lot.

Lee and Elle always wanted to go to the same school - part of their rulebook. But Noah's pleadings to have her next to him makes Elle try for Harvard as well, unbeknownst to Lee. Matters get a little more intense when temptations arrive in both Noah and Elle's lives in the form of Chloe (Maisie Richardson-Sellers) and Marco (Taylor Zakhar Perez) respectively. OTT Releases Of The Week: Sushant Singh Rajput’s Dil Bechara, Joey King’s The Kissing Booth 2, Danish Sait’s French Biryani and More

Getting to the nice things first, I am really glad that Elle is less of a pushover here than she was in the original. Lee and Noah aren't trying to control her life and decisions. What makes this character a lot more fascinating now is her insecurities are quite real. The constant fear of Noah finding a better match than her at Harvard, voluntarily deciding to give space to her boyfriend, getting jealous of a very eloquent and gorgeous potential rival for Noah's affection, Elle has grown up pretty well from an awkward, bumbling babe oscillating between her BFF and BF from the original to a person who takes decisions on her own, even if they are not always right.

What also works here is that this time, it's not just about how Elle and Noah are navigating in troubled waters of their relationship but adds a lot more dimensions. One of them being Lee's relationship with his girlfriend Rachel which blows right up in his face with a constant Elle presence. It is handled very maturely making you side with Rachel in this debate. What do you do when your boyfriend wants his best friend to be always with him even on dates? Fortunately, it's not because of romantic feelings, that would have ruined the show completely. Also, the story this time has representation from the LGBTQ community which has been handled smoothly and smartly. It also does a commendable job of not pitting the women against each other even though there were plenty of cues for that.

Watch the Trailer of The Kissing Booth 2:

The biggest issue, however, with The Kissing Booth 2 is that writer-director Vince Marcello and co-writer Jay S Arnold are all over the place with big moments. While the 'kissing booth' obviously exists, there's a dance competition and a Homecoming jammed together in the story. It's as if they kept three possible scenarios around where the movie could get a rousing finish, only forgot to make them cohesive. In fact, by the time Kissing Booth day arrives, you aren't really sure if that was needed apart from justifying the film's name. All that makes the movie extremely long and the lack of good pace, threatens to derail your interest. It is two hours and 12 minutes long. Not needed if you ask me!

Talking about performances, Joey King does a swell job as Elle and keeps it quite relatable. Jacob Elordi's Noah is much tamer than the original where he is not getting into fights for the heck of it. King and Elordi had already broken up by the time they started shooting the sequel but you can't spot the difference. I wonder if Noah being away at Harvard for the better part of the film worked in their favour.  The chemistry is intact though! Joey Courtney too has a better character graph here giving him the scope to explore more than his friendship with Elle. Sellers and Perez are refreshing additions to the cast.

The Kissing Booth 2 definitely redeems itself by rectifying the mistakes of the original with an end that suggests there could be 'one more' in the series. Sluggish at times and slightly long, it is still an entertaining romcom that won't let you down.

(The above story first appeared on LatestLY on Jul 24, 2020 05:39 PM IST. For more news and updates on politics, world, sports, entertainment and lifestyle, log on to our website latestly.com).