Undekhi season 2 makes us wonder is the sequel an overkill? Even when the ending of first season was underwhelming, it smoothly lent itself to a sequel but the second season couldn't live up to the expectations. Undekhi streams on SonyLIV. It stars Dibendu Bhattacharya, Surya Sharma, Ankur Rathee, Anchal Singh and more. 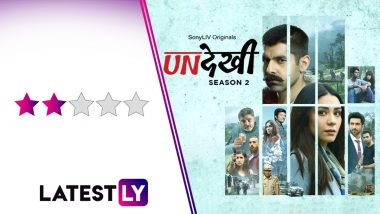 Undekhi season 2 review: SonyLIV's Undekhi in its first season left everyone speechless. It was brutal, real and excruciatingly bloody. In between all that, the characters and the actors playing them shine bright. While we did have some reservations with the way the series ended, the first season left us satisfied. So a sequel of the same series definitely comes burdened with lot of expectations. Undekhi season 2 however couldn't manage expectations, forget about exceeding them! Undekhi Review: Dibyendu Bhattacharya, Surya Sharma Impress in SonyLIV's Arresting Crime Series.

The sequel begins from exactly the spot the first one ended. DCP Ghosh (Dibyendu Bhattacharya) manages to fool Rinku (Surya Sharma) who was out to kill Koyal (Apeksha Porwal), one of the surviving dancers from last season. But the plan goes horribly wrong and now Koyal is believed to be dead. Ghosh leaves Manali in a huff while Rinku and his gang continue to kill anyone who could threaten to take Papaji (Harsh Chhaya) to jail for his crime. This includes the crew who shot Daman (Ankur Rathee) and Teji's (Anchal Singh) wedding. A few secrets tumble out with unsuspecting people killing each other.

Moving to the good parts first, in the previous season Teji was the only one who was holding the fort for a woman of purpose in this heavily men-driven story. This time there is Muskaan, Rinku's wife who becomes a great character to watch. Koyal who showed a lot of teeth in the previous season despite her circumstances has come-of-age and is more driven than ever. These characters add some newness to the plot. Manali continues to be an integral part of chaos. The chill in the air and in the proceedings can be felt.

One of the biggest asset of the first season of Undekhi was the way the story was written and executed. The way the writer included the death of a dancer during a wedding UP in the midst of celebratory firing and expanded on it was truly devastating. That's exactly where the second season falters. The first few episodes are just about indiscriminate killings with hardly anything happening which could monumentally alter the course of the story.

The advantage of having familiarity with characters also become its biggest drawback as none of them become anything more than what you have already seen. So Rinku continues to be on a kill-all mode, Teji is still conspiring against Atwals, only difference is she has Daman on her side this time, DCP Ghosh will do anything to take Koyal to Kolkata. There are new characters in the form of Samarth (Nandish Sandhu) and Abhaya (Meiyang Chan) who are just an extension of the Atwal's  world of crime. Undekhi Actor Surya Sharma Speaks Up on How He Bagged the Lead Role in Sony LIV’s Crime Show.

Performances are decent but nothing that you haven't seen before. Fortunately, Harsh Chhaya this time is allowed to do more than just ham and that worked well. He needs a director who can put his talent to use, fortunately, you see some spark here. Surya Sharma, the star of the previous season, continues to be on top form here too but the writers do a disservice by keeping him highly one-dimensional. Dibyendu Bhattacharya is still the light vein of the series and his absence from a couple of episodes make you miss him.

Undekhi season 2 makes us wonder is the sequel an overkill? Even when the ending of first season was underwhelming, it smoothly lent itself to a sequel but the second season couldn't live up to the expectations. Undekhi streams on SonyLIV.

(The above story first appeared on LatestLY on Mar 04, 2022 07:59 PM IST. For more news and updates on politics, world, sports, entertainment and lifestyle, log on to our website latestly.com).