Vijayendra Kumeria On Working With Nia Sharma and Rashami Desai in Naagin 4: 'They Both Are Lovely People and It's Fun to Have Them Around' 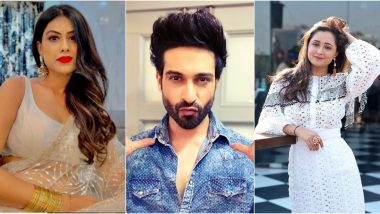 Naagin 4 was among one of the daily soaps that began shooting back in July, albeit, for its end. It can be recalled that Ekta Kapoor herself announced the end of Naagin 4 and how Naagin 5 will make its way in its place. Now that his show is coming to an end, the actor got talking about his Naagin: Bhagya Ka Zehreela Khel leading ladies Nia Sharma and Rashami Desai and had only praises to say for them. Ekta Kapoor Confirms Naagin 5, Says 'Naagin 4 Will End With A 4 Episode Fantastic Finale And We Will Immediately Get Into Naagin 5' (Watch Video).

"It’s a great experience working with both. Nia very naturally brings different energy in the scene. There are hardly any retakes when you are acting with her. Rashami’s expressions do wonders in every scene, and she is so effortlessly good. Even off-camera they both are lovely people and it is fun to have them around," gushed Vijayendra. Vijayendra Kumeria on Naagin 4 Finale: 'I Believe the Last Shot of the Show Will Be Shot With the Same Intensity as the First'.

Opening up about how maintaining distance and not greeting anyone physically is the new normal, Vijayendra went on to add, "We all were happy to see each other, but it was funny that instead of hugs, we were doing Namaste, but the rest is almost same. We still enjoy doing good scenes and put in the same effort that we used put in all our scenes and we will do that till the end," Vijayendra said. Naagin 4 Finale Promo: Nia Sharma, Rashami Desai'a Show To Begin The End With A Big Twist (Watch Video).

The actors are currently shooting under the guidelines issued by the government courtesy the Coronavirus pandemic. And the actor says there is always a fear because of the outbreak. "Utmost precautions are taken. Safety and hygiene is maintained on the set. Everybody in the unit is aware about the guidelines and is being responsible. It’s a little difficult to shoot with less man power and you miss the old times when we used to sit together during lunch breaks and share food, but it’s necessary for our own good. Back of your mind you always have this little fear and this little fear is required," he concluded.

On a parting note, Vijayendra said, "As we all know the show is concluding soon, as the makers have said it already, the viewers should expect a fantastic end. I expect the same."

(The above story first appeared on LatestLY on Jul 12, 2020 12:25 AM IST. For more news and updates on politics, world, sports, entertainment and lifestyle, log on to our website latestly.com).