Year Ender 2019: Game Of Thrones, Stranger Things, Big Little Lies and Other Shows That Served Us the Most Shocking TV Moments This Year!

It has also been a year filled with versatility when it comes to content and while on one hand, there were successful series in the fantasy, science/fiction genre such as Stranger Things, we also saw some excellent shows based on real-life incidents such as Chernobyl. Here's looking at the most shocking TV moments. 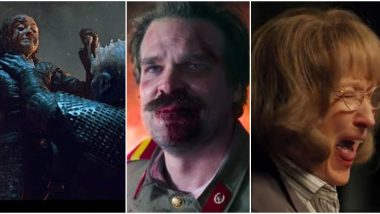 2019 has been a big year for Television on many accounts. While several major Television series came to an end, Game Of Thrones, Big Bang Theory to name a few, there was also a surge in major actors turning from silver screen to digital mediums and TV series. It has also been a year filled with versatility when it comes to content and while on one hand, there were successful series in the fantasy, science/fiction genre such as Stranger Things, we also saw some excellent shows based on real-life incidents such as Chernobyl. As someone who binged on most of it this year, find no reason to complain that this was also the year that women artists kicked some ass with shows like Killing Eve, Fleabag and Big Little Lies packing a punch. Year Ender 2019: Black Widow, Wonder Woman 1984 and Eternals - A List of Superhero Movies Releasing in 2020.

The variety of content seems to have only doubled ever since the advent of digital mediums and for a viewer, the digital shows and some classic Television reality-shows like Great British Bake-Off have successfully managed to glue them to screens. This year, there have been some incredible moments on TV shows that made us laugh, cry and even ogle at our screens with shock. Here's looking at some of them.

Game Of Thrones has been one of the biggest shows of 2019 given that the final season of the series released this year. After Season 7's finale, it seemed like the Night King was one crucial character and nobody expected his death to come so soon and in such an easy manner. Maisie Williams' character Arya Stark killed the Night King in a shocking twist and while a lot of viewers weren't convinced with it, it sure was a what-the-hell-just happened moment for the audiences.

One of the big highlights of the second season of Big Little Lies season 2 was the fact that Mery Streep was to star in it. The already successful show starring some big Hollywood names such as Reese Witherspoon, Nicole Kidman, Shailene Woodley, Laura Dern and Zoe Kravitz revolved around strong themes of domestic violence and sexual abuse. During the first episode of the second season itself, Streep made a strong impact in one of the scenes where she speaks about having the urge to scream on tough days and out of nowhere, just screams out loud. Apart from being totally unexpected, it was also a brilliant scene.  Year Ender 2019: From Alia Bhatt to Ajay Devgn ' Here's a List of Bollywood Celebs Who Will Play Key Roles in Upcoming South Movies.

3. Drogon Melts the Iron Throne After Jon Snow Kills Daenerys Targaryen in GOT

Coming back to Game Of Thrones again, one of the biggest twists of the finale without a doubt was the fact that there was no Iron Throne for Bran Stark to sit on considering Drogon burnt and melted it to the ground. Yes, the shocking finale had us watch Jon Snow stab (his love - but well, she was his aunt) Daenerys Targaryen to death and as a reaction to that, her loyal dragon, Drogo unleashes his rage and melts the Iron Throne.

Yes. I'm not going to pick what was the most shocking part of Chernobyl given that all of it was. Be it the sheer negligence and power-hungry nature of a few people resulting in a historic nuclear disaster or the answer to the big question asked at various points in the series, "How does a nuclear reactor explode?". The answer, because of lies. The mini-series is laden with rather saddening moments than shocking ones and nonetheless is a deserving member of this list.

5. When Justin Foley Admitted to Being a Survivor (of Sexual abuse) on 13 Reasons Why Season 3

The third season of 13 Reasons Why did not come with a bang but it did have some crucial moments that needed more attention. The series did a great job of taking us through the journey of a sexual abuse victim becoming a survivor. Alisha Boe's character Jessica Davis emerged as an out and proud survivor on the show but it's more important how she helped other victims cross the tunnel and recognise themselves as being survivors and not mere victims what they have been through. In one of the amazing scenes from the series, we saw Tyler Down publicly open about being a survivor of abuse and while it was a teary-eyed moment for those of us who have seen his character's arc, it was a shocker to see Brandon Flynn's Justin Foley admit the same too. Justin's character from the first season has been through several changes, from being a hotshot player to a drug addict to now being a survivor of sexual abuse.

One of the biggest cliffhangers of Stranger Things Season 3 has been the fate of Chief Hopper played by actor David Harbour. Ask any fan of the series and all they would want to know about Season 4 is whether Jim Hopper is dead or alive. In season three, Hopper appeared to die, sacrificing himself to close the gate to the Upside Down Town as Joyce (Winona Ryder) watched the sheriff perish before her eyes and well, that wasn't what anyone expected.

7. When the Priest Saw Fleabag Break the Fourth Wall

Unless you have been hiding under a rock, you know what Fleabag is. Only the most-talked-about, brilliantly written show starring Phoebe Waller-Bridge and Andrew Scott. The show's successful first season was followed by an even more successful second season which released in May this year. While we got used to Waller-Bridge's Fleabag breaking the fourth wall and chatting with us all the way, it was an amazing moment on the show when Andrew Scott's character of 'Hot Priest' realised the same too. There's a moment in the show when Scott's priest asks her "Where did you just go?" when she quickly remarks about him to the camera and it just took this show to another level. This is the moment we realise, that it's probably the priest who is the only person actually listening and paying attention to her.

Surely there have been much more bigger moments on TV that, pardon me, I may have missed out on but given that these shows received a global audience, these are surely the big ones. With a few of these shows such as The Stranger Things and 13 Reasons Why will be coming back for another season, we can look forward to more interesting stuff. If you happened to catch several other shows, do tell us what were the most shocking moments for you!

(The above story first appeared on LatestLY on Dec 04, 2019 11:25 PM IST. For more news and updates on politics, world, sports, entertainment and lifestyle, log on to our website latestly.com).