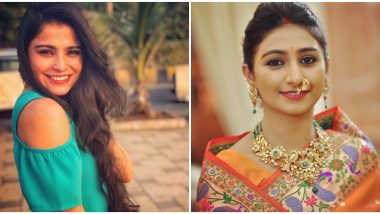 And looks like the makers of Star Plus' Yeh Rishta Kya Kehlata Hai have finally found the replacement for actress Mohena Kumari Singh who played the role of Keerti Singhania in the show. Actress Harsha Khandeparkar will be replacing Mohena Kumari on the show and as per ETimesTV, Harsha will be marking her entry as Keerti in the show from August 17. So far, the makers have shown Keerti's character to be out of town, but have now decided to bring her back into the storyline. On Doctor’s Day 2020, Mohena Kumari Tests Negative for COVID-19; Actress Dedicates Instagram Post for Doctors and Healthcare Professionals.

Confirming the same, Harsha, who has already started shooting for the show, revealed, "I am doing the show. It is such a big dream come true to work with Rajan Shahi. Yeh Rishta Kya Kehlata Hai has been one of the longest-running shows on television and has such an amazing fan following. I feel blessed to be a part of the show." Mohena Kumari Singh and Suyesh Rawat Tie the Knot in a Royal Rajput Wedding Ceremony (View Pics).

The actress was also all praises for the production house for the COBID care that they have been providing on the sets. "Like it is said 'the show must go on' I have resumed shooting. I was skeptical at the beginning but when I started shooting, I saw that Rajan Shahi's production house is taking good care of everything. Sets, our makeup rooms, costumes, jewellery and everything else is getting sanitised every few hours. They keep a temperature check. In fact, when I joined the show, they even did my blood test to make sure that I didn't have any infection. They are taking utmost care and we get piping hot food on the sets. Initially, I was worried how I would manage without a maid, but I am getting treated here as a family and getting food on the sets, that too hot. Now, I don't have to worry. All the technicians, crew and actors are taken care of by the production house," she said. Yeh Rishta Kya Kehlata Hai: Shivangi Joshi and Mohsin Khan Recreate Madhuri Dixit and Salman Khan's 'Didi Tera Dewar Deewana' (Watch Video).

Opening up on comparisons that will take place with Mohena, who was quite popular and loved as Keerti, Harsah concluded, "There's always a challenge to replace somebody and this is the first time I am replacing someone. So, I am going to keep the same nuances that the character has, but I am also treating it as a fresh character. She had her way of doing the show and I have mine. Mohena is a fabulous actor and did an amazing job. She has great fan following and I just expect that fans give me the same amount of love."

(The above story first appeared on LatestLY on Aug 15, 2020 08:02 PM IST. For more news and updates on politics, world, sports, entertainment and lifestyle, log on to our website latestly.com).