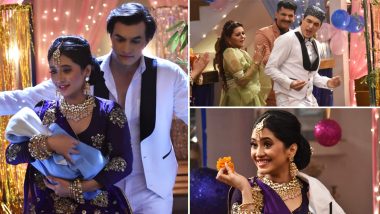 While Yeh Rishta Kya Kehlata Hai's return to television with fresh episodes has been a treat for loyal viewers of the show who have missed the drama, there's more in store for the audience. The upcoming track of the show will see the lead pair Shivangi Joshi and Mohsin Khan don avatars of Madhuri Dixit and Salman Khan, respectively, from their hit film Hum Aapke Hain Koun...! The couple will not only wear clothes similar to the ones that Madhuri and Salman wore but also re-create their famous number number "Didi Tera Dewar Deewana". Yeh Rishta Kya Kehlata Hai Actors Shivangi Joshi and Mohsin Khan Shoot for a Music Single, Video to Release Soon (View Pic).

In the upcoming episode, the family will be seen celebrating Gayatri and Samarth's baby shower and Kartik and Naira will take the fun and game a notch higher with their super entertaining performance. Shivangi Joshi On Playing A Double Role in Yeh Rishta Kya Kehlata Hai: 'The Experience Of Depicting Two Opposite Characters Is Thrilling'.

While Shivangi looked stunning in the gorgeous purple embellished saree, Mohsin looked quite dapper in a white suit that he sported with a black bow tie. Both the actors nailed their respective looks and their adorable chemistry as always is a delight to watch. Yeh Rishta Kya Kehlata is one of the longest-running TV shows of Indian TV history and is also the audience's favorite. It is produced under Rajan's banner Director's Kut Productions and airs on Star Plus.

(The above story first appeared on LatestLY on Aug 04, 2020 04:28 PM IST. For more news and updates on politics, world, sports, entertainment and lifestyle, log on to our website latestly.com).