As the curtain falls on 2020 and we are all set to enter 2021, let's revisit the bygone year which was unprecedented in human history. It was a period of cruising through the most challenging times when the Corona pandemic hit across the globe. Why despite many odds 2020 was a remarkable year for India- take a look? 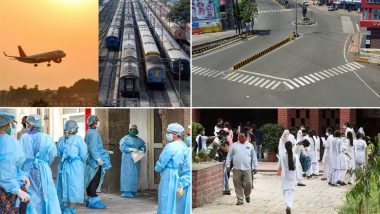 New Delhi, December 31: As the curtain falls on 2020 and we are all set to enter 2021, let's revisit the bygone year which was unprecedented in human history. It was a period of cruising through the most challenging times when the Corona pandemic hit across the globe. Why despite many odds 2020 was a remarkable year for India- take a look?

Just three months into 2020 and a nationwide lockdown was imposed in the backdrop of emerging cases of Corona. On March 24, when the 21 days lockdown was announced, it happened for the first time in the history of independent India. Before the lockdown, a 14 hour Janta Curfew was observed on March 22 which remained very successful. Year Ender 2020: The Year of Struggles For COVID-19-Hit Global Economy & Hopes of Revival.

Train and Flights Services Were Suspended

During the lockdown, even as the people were not allowed to come out of their houses the train and flight services were also suspended to discourage inter-state movements. Complete blockade of transportation system broke the chain of spread. For another 48 days, the stations were empty and tracks were desolate. Later the freight trains and migrant workers' special trains started to operate. Keeping social distancing norms, Railway Services are yet to resume their full capacity.

When the corona pandemic erupted a lockdown was announced due to which the imports of essential items also took a hit. Under this situation, India faced a challenge to provide the PPE kits to its medical fraternity who were at the forefront of fighting Corona. Turning the adversity into an opportunity India took a giant step in becoming self-reliant by producing the PPE kits indigenously. India now is not only self-reliant in PPE kit manufacturing but also exporting it to other countries.

Schools Shut Down for a Long Period

For the first time In the history of independent India, the schools remained closed from March till the Diwali break in November. Now the schools are again opening under the corona protocol and strict guidelines in many states. Also during the period of lockdown when schools were closed the online education was promoted.

The country observed the Janta Curfew on March 22, which remained very successful as the streets and roads remained desolate. On the appeal of PM Narendra Modi, millions of Indians joined in clapping, ringing bells, and beating thalis after Janta Curfew to show appreciation for the doctors and servicemen who were fighting the pandemic.

The first seaplane service was inaugurated in Gujarat by Prime Minister Narendra Modi on October 31 coinciding with the birth anniversary of Sardar Vallabhbhai Patel. The service offers connectivity from the Statue of Unity in Kevadia to the Sabarmati riverfront in Ahmedabad. The seaplane service in Gujarat is expected to boost the state's tourism and the Regional Connectivity Scheme UDAN.

It was just another feather in the cap as Andamans became one of the last Indian territories to get the high-speed net. A submarine optical fibre cable connecting Chennai and Port Blair was inaugurated on August 10 this year. The high-speed broadband connectivity will help people of Andaman and Nicobar to connect with other parts of the country more easily.

As the world community was looking to lay hands on a corona vaccine the middle of the year brought lots of cheers as the corona vaccine was developed in India as well.

(The above story first appeared on LatestLY on Dec 31, 2020 06:39 PM IST. For more news and updates on politics, world, sports, entertainment and lifestyle, log on to our website latestly.com).