In a bid to promote industries, the Bihar government on Thursday announced to provide 10 per cent grant to the industries related to leather and textiles. 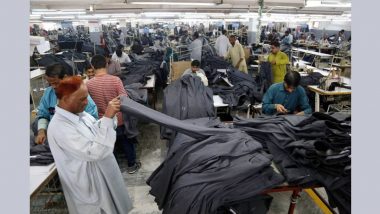 Patna, May 27: In a bid to promote industries, the Bihar government on Thursday announced to provide 10 per cent grant to the industries related to leather and textiles.

Additional Chief Secretary S. Sidharth said that Bihar government will give up to Rs 10 crore grant to industrialists who would set up their production facilities in Bihar.  Bihar: Several Trains Cancelled, Diverted on Patna-Kolkata Route After Protests at Barhiya Railway Station

"Under this policy, Bihar government will provide grants in power, employment, capital, and payment subsidies to the industries. The state government will give Rs 2 per unit power subsidy to them," he said, adding that it is a part of the 2022 industrial encouragement policy approved by the state cabinet.

The state government has also decided to pay Rs 3,000 to Rs 5,000 to every employee who works in those factories. Such as salaries will be additional payment to the labourers that would be included in the actual salaries fixed by the company. Bihar is considered as a labourer state in the country, but the ndustrial set up will change such a perception.

State Industry Minister Shahnawaz Hussain said: "It will turn out to be a landmark policy to encourage industrialists to invest in Bihar. Our state will soon become a leather and textile hub in the country. The Bihar government has prepared the best policy for the industrial sector to encourage investors

(The above story first appeared on LatestLY on May 27, 2022 11:13 AM IST. For more news and updates on politics, world, sports, entertainment and lifestyle, log on to our website latestly.com).