Earlier in the day, nearly a dozen activists of another pro-Tamil outfit Tamizhar Vazhvurimai Katchi were detained for demonstrating in the stadium's vicinity. 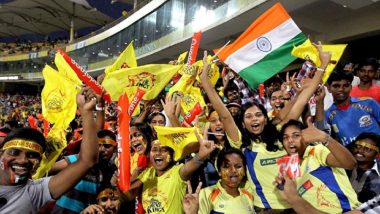 Earlier in the day, nearly a dozen activists of another pro-Tamil outfit Tamizhar Vazhvurimai Katchi were detained for demonstrating in the stadium's vicinity. (Photo Credits: PTI/Representational)

Chennai, April 10: Three protesters were detained by the Chennai police for hurling shoes during the IPL bout between the CSK and KKR at MA Chidambaram stadium here on Tuesday.

The incident happened during the first innings of the match, when CSK players Ravindra Jadeja and Faf Du Plessis were targeted by the miscreants.

The shoes were thrown by the trio to mark their dissent against the Centre which has failed to constitute the Cauvery Management Board to decide on the sharing of water between the two riparian states - Tamil Nadu and Karnataka.

Tamil political parties and a section of activists have targeted the IPL amid their dissent, calling it a "shameful event" at a time when the state's farmers are "facing the worst crisis in decades".

Earlier in the day, nearly a dozen activists of another pro-Tamil outfit Tamizhar Vazhvurimai Katchi were detained for demonstrating in the stadium's vicinity.

The Chennai police had on Monday released a list of guidelines for the spectators, barring them from carrying firecrackers, posters, banners and any electronic device except mobile phones to the stadium. The spectators were also warned against wearing black dress or bands.

A four-cordon security was provided for the conduct of the match, with 4,000 policemen deployed to guard the stadium from the protesters.

(The above story first appeared on LatestLY on Apr 10, 2018 11:33 PM IST. For more news and updates on politics, world, sports, entertainment and lifestyle, log on to our website latestly.com).