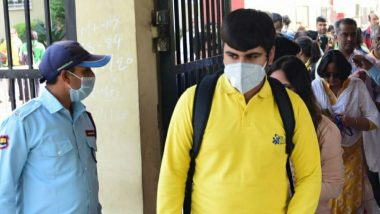 New Delhi, August 13: The University Grants Commission (UGC) was granted the permission to conduct final year examinations amid the COVID-19 pandemic, the central government informed the Supreme Court on Thursday. The submission was made by the government during the hearing on a batch of pleas seeking the annulment of UGC order issued to states and union governments to hold exams.

The decision to allow the UGC to conduct exams, despite the outbreak of virus and restrictions imposed in public, was based on the feedback received from the Union Ministry of Human Resources and Development (MHRD) and the National Disaster Management Authority (NDMA). Aaditya Thackeray Files Petition in Supreme Court Challenging UGC's Decision to Conduct Final Year Exams.

The final year examinations in most states and union territories were deferred following the outbreak of COVID-19 in India in mid-March. The issuance of health emergency and imposition of nationwide lockdown were cited as reasons for postponing the exams.

With the threat posed by COVID-19 yet to subside, a number of state governments including that of Maharashtra, West Bengal, Rajasthan and Delhi decided to cancel the final year exams and promote the students based on an average formula and past grades.

The UGC, however, opposed the move to promote the students without exams. The nodal education body said such a move would hurt the career prospects of students and reduce the credibility of certificates issued by Indian institutions. A batch of petitioners subsequently moved the apex court against the UGC order to hold the examinations.

(The above story first appeared on LatestLY on Aug 13, 2020 07:09 PM IST. For more news and updates on politics, world, sports, entertainment and lifestyle, log on to our website latestly.com).