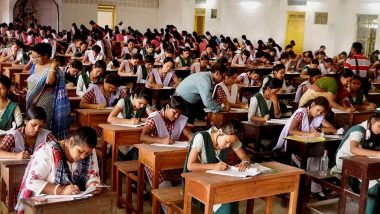 New Delhi, June 26: The results of ICSE and CBSE exams will be declared by July 15, claimed the counsel of both educational boards before the Supreme Court on Friday. The subjects for which examination could not be conducted due to COVID-19 pandemic will be marked on an average method or on the basis of internal examinations, the CBSE told the bench. CBSE Class 10, Class 12 Board Exam 2020 Cancelled, Class XII Students Can Opt for Exams to Be Conducted Later: Board Tells Supreme Court.

The counsel for ICSE agreed with the submission made by his CBSE counterpart, claiming that the former is also working on a similar mechanism to mark the students for subjects whose examinations have been cancelled.

Counsel for both the boards, however, told the apex court that students who wish to appear for the examination will be allowed to do so at a later date, when the threat of coronavirus transmission subsides.

ICSE, CBSE Results to be Out by July 15

SC says, after perusing the draft notification we permit the CBSE to issue the notification, class 10 & 12 exams of CBSE scheduled for July 1-15 will be governed by this order. CBSE & ICSE also assured the Court that results of the exams will be declared by July 15,the Court says

ICSE's lawyer Jaideep Gupta, while largely agreeing with the marking formula proposed by the CBSE for the cancelled exams, said their method to mark the students would slightly differ. "I have gone through the CBSE affidavit. Our affidavit is more or less the same. But our averaging formula is not the same as the CBSE," he said.

ICSE and CBSE exams were scheduled in February-March this year. While most papers were held, exams of a few subjects were postponed due to the outbreak of COVID-19 in all parts of India. The Boards had initially decided to hold the examinations in July. After apprehensions raised by several parent groups, it was decided to cancel the exams as the threat of COVID-19 continues to loom at large.

(The above story first appeared on LatestLY on Jun 26, 2020 11:33 AM IST. For more news and updates on politics, world, sports, entertainment and lifestyle, log on to our website latestly.com).