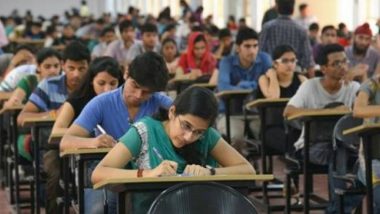 New Delhi, June 10: Only three Indian varsities were included among top 200 institutes, as part of the list compiled by the Quacquarelli Symonds (QS) World University Rankings (WUR) 2020-21. The three institutes which earned a spot in the list include IIT Bombay - ranked 152nd, IISc Bangalore which stood at 182nd spot and IIT Delhi placed at 184th. University Exams of Final Year Students Cancelled in Maharashtra, Marks to be Allotted as Per Aggregate.

Till last year, the ranking agency had considered 25 Indian institutes among the 1,000 noted varsities across the world. The number, this time, has come down to 21.

In what could reflect a major setback for the Indian academia, all varsities tagged with the Institute of Eminence (IoE) tag have slipped in the rankings.

Out of the 21 Indian Universities included in the list of 1,000, 14 have slipped in their rankings, three have maintained their last year ranks and four institutes - OP Jindal Institute, Savitribai Phule University, IIT-Hyderabad and IIT-Guwahati improves their positions.

The four Indian varsities that have been knocked down from the list include BITS Pilani and VIT. Last year, the QS WUR list had included them in the 801-1000 band.

Worldwide, the number one ranking has been secured by Massachusetts Institute of Technology (MIT), followed by Stanford University and Harvard University and 2nd and 3rd ranks, respectively.

(The above story first appeared on LatestLY on Jun 10, 2020 12:40 PM IST. For more news and updates on politics, world, sports, entertainment and lifestyle, log on to our website latestly.com).