A case has been registered against the unidentified man who pushed the deceased to death under Section 302 of the Indian Penal Code. 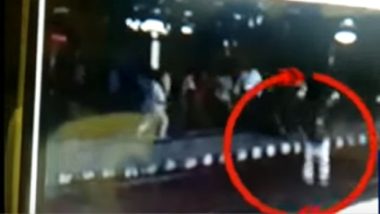 A case has been registered against the unidentified man who pushed the deceased to death under Section 302 of the Indian Penal Code. (Photo Credits: YouTube/TV9 Screengrab)

Mumbai, April 23: In a horrific murder caught on camera, a 56-year-old man was pushed in front a moving local train by another person with whom he was involved in an altercation at the Mulund station.

The deceased, identified as Deepak Chaman Lal Patwa, was a resident of Mulund and was involved in trading of iron parts. His murders are yet t be identified.

Watch the CCTV footage of the man being killed at Mulund station:

The CCTV clip dates back to Sunday afternoon, reported TV9. Preliminary investigation has revealed that the deceased was tangled in a verbal fight between a man and a woman for reasons yet to be known.

The verbal duel took a violent turn as soon as the local train neared the platform. Patwa fall on the tracks seconds before the speeding local arrived, leaving no scope for the passengers to rescue him.

A case has been registered against the unidentified man who pushed the deceased to death under Section 302 (murder) of the Indian Penal Code. A rigorous search operation has been launched to nab the accused, along with the woman who was accompanying him at the station.

(The above story first appeared on LatestLY on Apr 24, 2018 12:00 AM IST. For more news and updates on politics, world, sports, entertainment and lifestyle, log on to our website latestly.com).