Prime Minister Narendra Modi will inaugurate and lay the foundation of multiple development initiatives worth around Rs 20,000 crore in Jammu and Kashmir on Sunday. 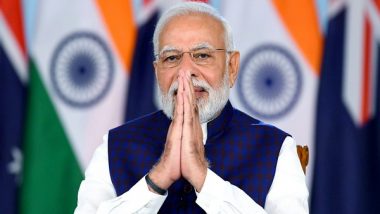 Jammu, April 24: Prime Minister Narendra Modi will inaugurate and lay the foundation of multiple development initiatives worth around Rs 20,000 crore in Jammu and Kashmir on Sunday.

This is the Prime Minister's first visit to J&K after the abrogation of Article 370 on August 5, 2019. Ahead of Modi's visit, Union Minister for Rural Development and Panchayati Raj, Giriraj Singh and MoS in the same Ministry Kapil Moreshwar Patil reached Jammu on Saturday.

The developmental projects being inaugurated include the Banihal-Qazigund road tunnel to establish all-weather connectivity between the two regions of the Union Territory.

The 8.45 Km long tunnel will reduce the road distance between Banihal and Qazigund by 16 Kms and reduce the journey time by around one and a half hours.

It is a twin tube tunnel, one for each direction of travel, and the tubes are interconnected by a cross passage every 500 m for maintenance and emergency evacuation. The Prime Minister will also lay the foundation stone of three road packages of the Delhi-Amritsar-Katra Expressway, being built at a cost of over Rs 7,500 crore.

Seeking to develop and rejuvenate 75 water bodies in every district of the country, the Prime Minister will launch a new initiative named 'Amrit Sarovar'. Among other projects, Modi will lay the foundation stone of Rattle and Kwar hydroelectric projects, a 850 MW facility to be constructed on Chenab river in Kishtwar at a cost of around Rs 5,300 crore, and 540 MW Kwar hydroelectric project to be build in on the same river at a cost of over Rs 4,500 crore.

In order to further expand the network of 'Jan Aushadi Kendras' in Jammu and Kashmir, and to make good quality generic medicines at affordable prices available, 100 centres will be inaugurated by the Prime Minister. These centres are located in remote corners of the Union Territory. PM Narendra Modi Inaugurates 'Pradhanmantri Sangrahalaya' in New Delhi (Watch Video).

Modi will also inaugurate a 500 KW solar power plant at Palli, which will make it the country's first Panchayat to become carbon neutral.

During his visit, he will also hand over 'SVAMITVA' (survey of villages and mapping with improvised technology in village areas) cards to beneficiaries under the scheme. The cards will give villagers documentary proof of their ownership of properties so that they can use them for financial benefits if required.

He will also transfer award money to Panchayats which are winners of awards given across different categories.

Modi will directly transfer an amount of Rs 44.70 crore as prize money ranging from Rs 5 lakh to Rs 50 lakh to the bank account of 322 awardee Panchayats across 31 states/UTs in the country digitally during the function at Palli Gram Panchayat.

The e-Panchayat Puraskar is conferred upon those states which have ensured maximum use of Information Technology for monitoring the works of Panchayats.

The Central Government has requested all states/union territories to confer awards and plaques to concerned awardees of National Panchayat Awards 2022 on the occasion of National Panchayati Raj Day by in-charge Ministers of the districts, Members of Parliament (MPs), Members of Legislative Assembly (MLAs), senior Administrative Officers, eminent personalities, etc., who may also be requested to attend Gram Sabha in any one Gram Panchayat.

National Panchayati Raj Day will serve as an important occasion as well as a significant step towards creating awareness and building momentum for India@2047 and also building institutional, individual, institutional, cross-organisational and operational capabilities for achieving the global SDGs agenda in local context by 2030.

Seventeen SDGs are subsumed under nine broad themes, and one or more such themes will be adopted as Sankalp by Gram Panchayats in specially convened Gram Sabhas on April 24.

The Ministry of Panchayati Raj has requested all Gram Panchayats to organise Special Gram Sabha meetings across the country to mark the occasion of National Panchayati Raj Day. Ministry of Home Affairs is Likely To Announce 100 Days Leave For Every Security Personnel of CAPF.

April 24 is observed by the Ministry of Panchayati Raj as National Panchayati Raj Day (NPRD) every year to celebrate the Constitutional status accorded to Panchayati Raj system in the country. This occasion provides an opportunity for direct dialogue with Panchayat representatives from all over the country as well as recognizing their achievements to empower and motivate them.

(The above story first appeared on LatestLY on Apr 24, 2022 09:20 AM IST. For more news and updates on politics, world, sports, entertainment and lifestyle, log on to our website latestly.com).